Novak and Serena champions and England one up… on grass 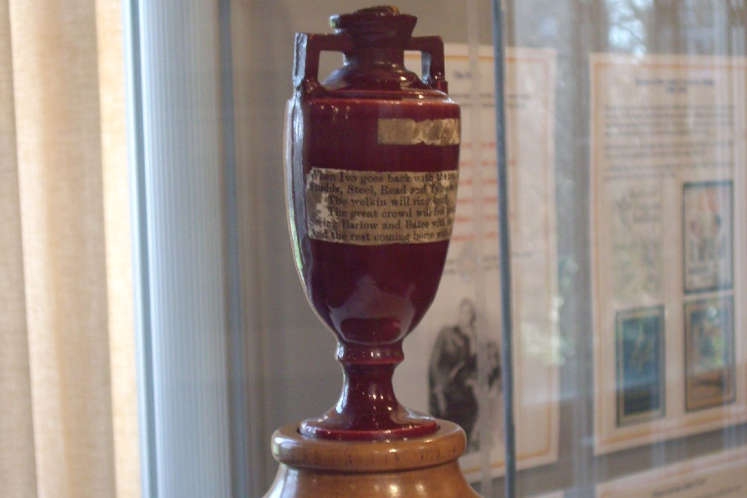 AT the weekend´s (July 11) main cricket event, England (430 and 289) thrashed grumpy and moaning Australia (308 and 242) by 169 runs in the first Ashes Test at Cardiff. The Aussies were second best after the first hour’s play on day one and in the words of ex-player Ricky Ponting: “They deserved to lose!” Even the tourist’s skipper Michael Clarke said: “We were outplayed.”
Joe Root, who scored 134 and 60, took great catches and claimed few wickets, was named ‘Man of the Match’. Bowlers Stuart Broad and Mark Wood, all-rounder Moheen Ali and Ben Stokes were other England successes… and the Welsh supporters were “fantastic” said Wood. The second Test starts at Lords on Thursday (July 16), and there is no doubt that England’s captain is ‘Cook-a-hoop’!
In tennis, Andy Murray’s semi-final conqueror and World number one Novak Djokovic retained his Wimbledon singles title by beating seven-time champion Roger Federer in four sets in the final.
Changing sexes, and Serena Williams won her 21st Grand Slam title in her 25th final with victory over Gabine (Gabby) Muguruv, the first Spaniard to reach the last two of the women’s singles since Conchita Martinez in 1998. Williams now holds all four major Grand Slam titles, a feat she achieved back in 2002-03. And by winning at Wimbledon for the sixth time, she became the oldest champion in the modern era at 33. Both singles’ champions each received £1.8m (€2.5m) for their efforts.
There was more misery for the Murray’s when Jamie and Aussie John Peers lost in the men’s doubles final, but Martina Hingis returned to winning ways with victory in both the women’s and mixed doubles events.

GOLF shock – There will be NO Rory McIlroy at this year’s 144th British Open which begins on Thursday (July 16) at St Andrew’s; he damaged his ankle playing football! But Jordan Spieth, chasing a third Major in a row, Zach Johnson, Branden Grace, Rickie Fowler, Justin Rose and others will all be looking for glory and winning £1.12m (€1.55m).

FOOTBALL – West Ham United and Aberdeen are safely through to the next stage of the 2015-16 Europa League tournament – but St Johnstone are out. And on the transfer front, at the time of writing, German World Cup winner Sebastian Schweinsteiger of Bayern Munich was having talks with Manchester United…Robin van Persie was set to leave Old Trafford for Fenerbahce… Liverpool’s Raheem Sterling was on the brink of joining Manchester City for £49m… and Glen Johnson had agreed to move from Liverpool to Stoke who have sold goalkeeper Asmir Bergovic to Chelsea.

OTHER SPORTS NEWS: The Tour de France continues (until 26th of the month) leading the race at the start of this week (July 13) was Britain’s Chris Froome while the ‘Manx Machine’ Mark Cavendish was still winning stages.
Friday, Saturday and Sunday (July 17, 18, 19), Great Britain’s tennis stars including the Murray brothers, Andy and Jamie and James Ward, take on France in a quarter-final Davis Cup-tie at London’s Queen’s Club. The Seca-US World Superbike Championships take place over the weekend of July 18-19.
Last weekend (July 11-12), Scottish jump jockey Brian Toomey is riding again – two years after suffering a head injury that almost killed him. He took to the saddle at Southwell, having technically ‘died for six seconds’ back in 2013 after a fall at Perth which hospitalised him for 157 days.
There is a Diamond League Athletics meeting in Monaco on Friday night (July 17) where Usain Bolt is expected to race against Justin Gatlin.
And England’s women cricketers play Australia in One Day Internationals at Taunton on Tuesday (July 21) and at Bristol next Thursday (July 23).
Hereford United football club (dissolved in 2014) has reformed under a new name: FC Hereford – after fans and local businesses raised over £200,000 to get a new ground. They played their first match last Saturday (July 11), beating FC United of Manchester 1-0 before a crowd of 4,500.