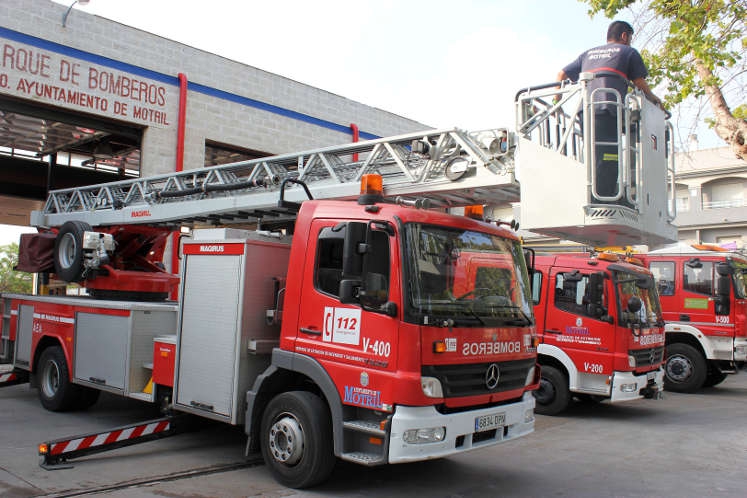 The Motril fire brigade helped in the extinguishing works.

SIX days after it started, the forest fire located at a mountainous area between Gualchos and Lujar (Costa Tropical of Granada) was finally extinguished yesterday (July 15).
The level 1 risk was activated on Thursday (July 9), as the fire threatened residents’ lives and their properties, and was only deactivated last Saturday.
The fire, which in the end did not cause any casualties or damage to properties, forced authorities to evacuate a total of 624 residents from the areas of Lujar, Rubite and two districts in Orgiva (Olias and Fregenite).
The Infoca forest fire and prevention services have estimated that at least 2,000 hectares of pines, cork oaks and bushy areas have been burnt to the ground.
Authorities are currently investigating the reasons behind the blaze and believe it could have been a spark from a power line cable which started it, as was explained by sub-delegate of the central government in Granada, Santiago Perez, who added that investigators cannot yet confirm the fire was not started by a person, on purpose or by accident.
A team of experts have flown over the area to determine how much forest area has been affected and evaluate if there will be a risk of mudslides during the rainy season, according to a statement released by the Junta de Andalucia Regional Government.
In addition, on Friday experts from the Regional Agriculture Office in Motril started analysing the damages caused to agriculture and cattle land plots of the area, as well as those caused to green houses, olive and almond trees plantations.
Involved in putting out the fire were the Andalucian Emergency services 112, Civil Protection from Calahonda, Motril, Huetor and Granada, Guardia Civil officers, the Motril Fire Brigade, Local Police of Gualchos and Cruz Roja from Motril, amongst many others.
The fire had burnt down at least 2,000 hectares of the Lujar mountains, one of the most important environmental sites of the Costa Tropical,
“I have never been in hell, but my town was the closest to it today,” said Mayor of Lujar, Marina Gonzalez.