The long way of Saint James 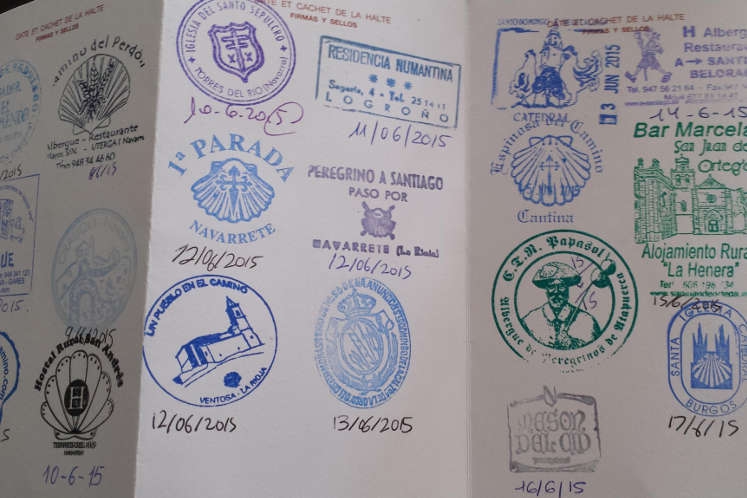 PILGRIMAGE: Your ‘passport’ is stamped along the route to Santiago de Compostela.

The church had declared the route “compulsory” during the Middle Ages, especially if you had lots of baggage and needed to repent. The divine destinations were Jerusalem, Rome or Santiago de Compostela. Yet, some 900 years later, the latter route is still exceedingly popular amongst the religious of all sects.
Over the years the journey has evolved into a well-orchestrated event. Travellers continue to pour in from France and Spain to follow well-trodden routes. Some are on bikes or even horses or donkeys but by far the majority arrive on foot, check in and obtain their passport and head out. There are famous starting points and you must begin at least 100 kilometres away from Santiago.
Long-serving Mojacar resident Bob Olear has just returned from his trek and traded route secrets and insights for pints of Guinness at the ‘Nail’.
“A lot of true strategic planning goes into the event. Walking it means that your backpack must contain all that you will need for the two or three weeks, yet overburdened it works against you.
“Your two most vital enemies are the sun and being in some sort of reasonable shape. Towns are relatively close to each other and have been offering hospitality for almost a millennium to travellers.
“Generally, you start early each day to get as much walking in before the sun starts burning. I was always on the road before 6am but quite a few times I let the stars guide me and left at 3-4am.
“En route, some of the cathedrals in the tiny hamlets are just mind- blowing in their beauty and simplicity. It also gives you a chance to chat with the many other nationalities along the way,” Bob told me.
“Bob, this is your second trip. Was it better than your first?” I asked. He replied: “Absolutely, mostly because my pack weighed just 13 pounds instead of the previous one carrying 30 pounds. I tried to get in much better shape to avoid shin splints. I logged officially 775 kilometres but naturally you walk much more off route to investigate points of scenic interest or castles. The route is well marked with plenty of signs and as the day wears on you are pretty much following the crowd.”
Santiago de Compostela is a must place to visit, even if you nip in by car. Writer James Michner dedicates an entire chapter to it in his book Iberia. And the internet is full of groups that leave periodically to make their journey.