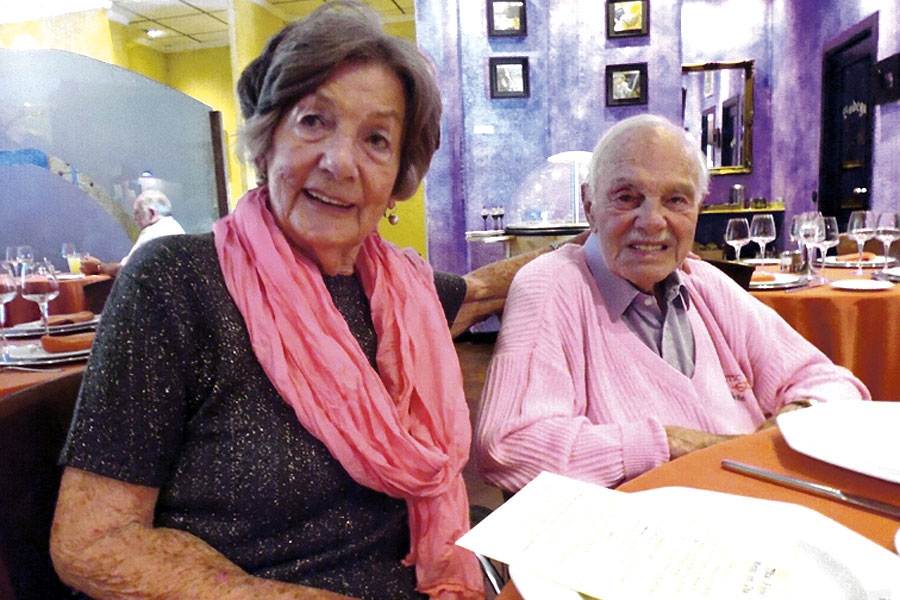 MOJACAR’S oldest resident is Herbert Finch, who will be 100 on August 22, and has lived in the town for the last 35 years.

Colonel Herbert Finch TD, known in Mojacar rather less formally as Bertie, will be celebrating his centennial birthday at home, surrounded by his family and friends.

‘Family’, of course, can mean quite a crew when you have 100 years behind you, and Bertie’s regiment is large and comes from all over the world, including Canada, Monte Carlo, Guatemala, Holland, Tenerife, the Channel Islands and his own beloved England.

His dear companion Inga (pictured with Bertie) will be organising the Great Day.

Bertie was born in Parbold, Lancashire in 1915, and was part of the D-Day landing force in Normandy where he was field-promoted to Captain.  He was active in Antwerp, Cuxhaven and many other areas with his small group of specialists as an Enemy Ammunition Disposal Group – a terrifying job which would later be known widely as a Bomb Disposal Unit.

Bertie was demobilised in 1946 and later rejoined the Territorial Army. In 1947, he retired as Deputy Inspector of Ordnance Services Western Command with the rank of Colonel.

He moved to Mojacar in 1980 after the death of his wife and famously registered the area’s first bowling club, located in Cortijo Cabrera, Turre.

In 1996, he was given the task to form the first branch of the Royal British Legion, which he did with 15 members. Later he helped with the formation of two more branches. Inga, as always ‘was his rock’.

Bertie plays the violin to help him feel relaxed. Asked if he liked being 100 years old, he answered: “Well, it’s better than the alternative.”

Buckingham Palace has confirmed that Bertie will be receiving a message from HM Queen Elizabeth II.

Bertie’s many friends in Mojacar will be joined by the larger public, as well as Euro Weekly News,  in wishing him both a happy birthday and most sincere congratulations.

On August 22 1915, 100 years ago, while the First World War raged in Europe on the Western Front, young Herbert Finch was making his debut.

Little did he or his parents know at that point, the major role that war would play in the future Colonel Finch’s life.

As the last British offensive was taking part on Gallipoli in August 1915, motor cars were a new invention and the convertible desk was the new craze in offices all over London.

As the first of Bertie’s years began, the Coca-Cola bottle had come into circulation, and Pyrex dishes had just been invented.