Now hear this. I might be about to go private for medical treatment 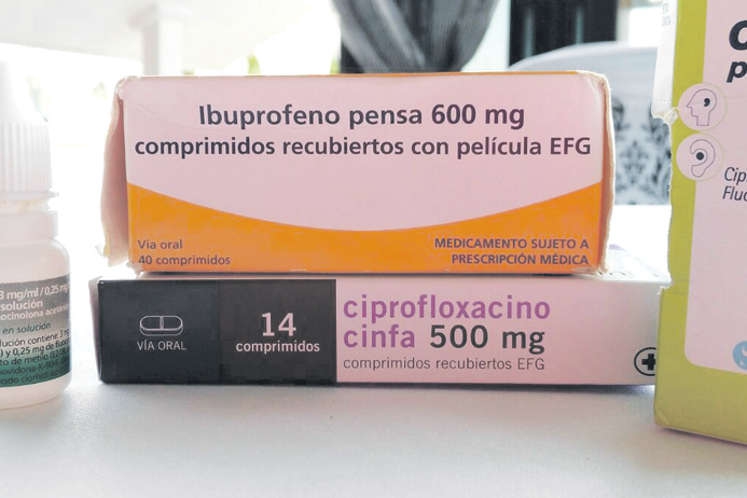 EXHIBITS: Neither of the prescribed antibiotics were any use for my condition.

I CAN’T believe that I am writing this, but I might be about to ‘go private.’ It’s totally against my lefty, hippy, sandal wearing principles but I have my reasons, believe me. I’ve been suffering with something which is very typical in Mallorca: recurrent ear problems.

I started to feel rather ropey on a Sunday afternoon during a beach party for a friend of my daughter, so I took myself off to our local emergency room. I was swiftly diagnosed with an ear infection and prescribed antibiotic ear drops (Exhibit

A) and packed on my way. Perfect, my normal experience of the Spanish public health system.

No bedside manner, no big deal. I have my medication so therefore I am happy, bish bam bosh. The following day, Monday, I made an appointment to see my family doctor. Off I trotted to see my doc, only to find in his place a rather sullen and completely disinterested locum. Well, it is August, so everyone’s on holiday.

I was briefly examined by this chap who told me the first set of drops I had been prescribed were no use and that I should be using another set. I went to the Farmacia to collect them only to be told by my wonderful local chemist that the locum had prescribed had exactly the same ingredients as the emergency doctor. Hmm, thought I, not so impressive. But I bought the drops (exhibit B) to be on the safe side. The next day I woke to find I had an ear infection in the other ear.

By now I was very tired, very grumpy, completely deaf and very behind in my work.

I made another appointment. Expecting to see the same locum I went in to find another locum, this time he was a she, and if possible even less interested in my painful problem. “You already have the drops you need,” she told me. Yes, I have the antibiotics from Sunday but it’s now Thursday.

“No, no, the drops you were given on Tuesday,” she replied. I showed her both bottles, so these are not the same then? I asked her. She took the bottle (Exhibit A) and said with accompanied eye rolling, “These are for wax.”

And then I called Dr Stoma in Portals, asked how much it would be to see him without private insurance and made an appointment. He listened, he was polite, he examined me properly, even asking if my ears were hurting when he touched them.

I didn’t realise that bedside manner was so important, but when you are feeling ill you need someone to be respectful and interested in you, not sullen, rude, rough and arrogant which is how I felt the locum doctors behaved towards me, aside from the obvious problem that neither of them had a clue what they were talking about.