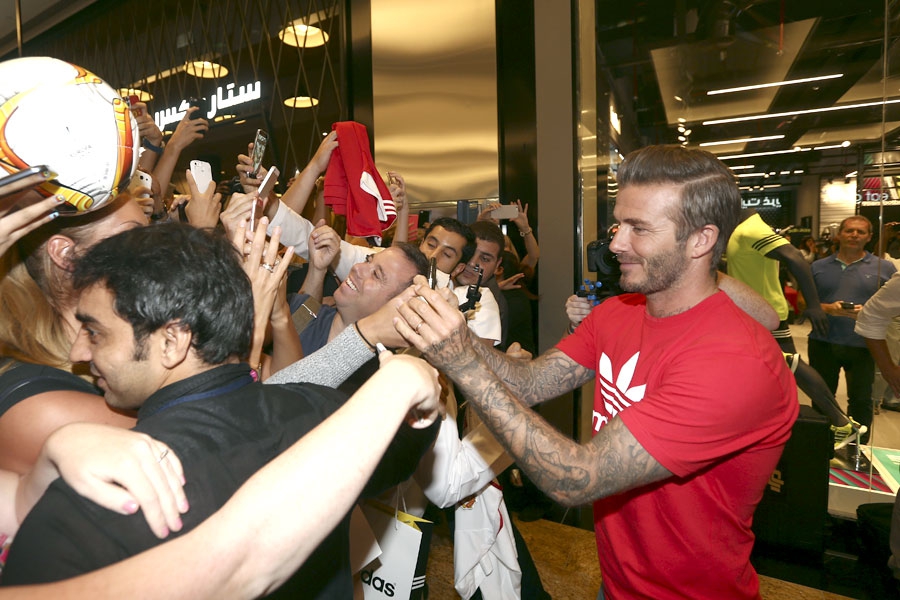 Global icon and footballing legend David Beckham signs autographs as he opened the new adidas HomeCourt concept store in the Mall of Emirates.

Global icon and footballing legend David Beckham today brought his ‘midas’ touch to the opening of a new adidas flagship store in the Mall of Emirates, Dubai to the delight of thousands of fans who caught a glimpse of the sporting superstar during a whistle-stop visit to the United Arab Emirates.

The unforgettable store opening brought the mall to a standstill and fans to a frenzy as the former England captain made the dreams of 30 Instagram competition winners, and their friends, come true. Beckham personally welcomed the lucky fans to the all-new ‘HomeCourt’ store before signing autographs and posing for photographs with his fans.

With sport at the heart of everything adidas does, it was the perfect introduction to the new HomeCourt store as fans spent precious time with the footballing superstar, creating memorable moments that only adidas can offer.

The next generation store concept was developed in line with adidas’ love of sport and celebrates the brand’s proud and authentic sports heritage to give consumers its best in-store experience yet. It is the first of its kind to be launched in Dubai with Beckham the ultimate guest of honour, bringing the concept to life. It offers an entirely new and interactive experience by bringing the spirit of sport to the 375 sqm store and creates a place where fans can feel the energy of the game and the thrill of the event from the moment they step inside.

After the opening Beckham said; “I always love coming to Dubai – it’s a special place that’s constantly evolving, just like adidas and their stores. Spending some time here today, it was great to get a sense of the energy people have for sport. In Dubai I’ve met people from all around the world who are united in their passion for sport.”

Rayyan Lodhi, 13, was one of the lucky competition winners. After meeting Beckham, he said: “Beckham is my idol, it was amazing to meet him. I’m not a Manchester United fan but everyone loves watching Beckham. Today was my birthday so we just talked about that, and he wished my happy birthday.”

Another competition winner, Ayaan Nadeem, 11 years old from Dubai, said: “That was my dream. He’s always been my role model. Who couldn’t love him? Not only is he one of the greatest players, he gives so much to charity.”

Amal Aal Rabeea, member of the UAE national football team and coach of Zayed University ladies team, also met Beckham at the adidas store. She commented: “He’s the reason I play. He’s been my inspiration, I’ve followed him in every league and every club he’s played for.”

Jason Thomas, Managing Director, adidas Middle East and Northern Africa commented: “The adidas HomeCourt store concept is all about celebrating a love of sport and there could be no better person to represent that than David Beckham. He is one our most celebrated icons and a face of the brand who is adored worldwide, especially in the region. The response to our Instagram competition and the reaction of fans today is an incredible showing of his universal appeal.

“The store at Mall of the Emirates is a new home for sport fans. It’s a unique place that takes the consumer experience to an entirely new level by featuring sport and passion in every single element. David’s appearance at the store this week is a bold statement that signals our commitment to the region and our intent to put fans at the heart of sport. It is the start of exciting new journey for adidas and for fans, all starting as soon as they enter the store”, added Thomas.

A key feature of the new adidas HomeCourt concept is the Arena Façade, creating a bold, distinctive new look for adidas. Like an entrance gate, the Tunnel Entry draws consumers into the big game and welcomes every visitor with a “sound shower” of cheering fans into the stadium.

The innovative new store also features a Team Room, a large fitting area and social space that allows shoppers to try on products whilst being able to interact with the brand. Premiering in the adidas HomeCourt store is the Shoebase at Centrefield, the heart of the store. It creates a central spot that brings to life the focused energy of game day. The Shoebase also features a range of unique interactive elements that provide consumers with a truly special retail experience.

“HomeCourt gives consumers the opportunity to experience the entire breadth and depth of the adidas brand,” said Jad Chouman, Senior Marketing Director, adidas Middle East and Northern Africa. “We reference sport in every element of the store from the materials selected to the inspirations of the designs to the tools we use for storytelling.”

For more detailed information on the new adidas retail concept HomeCourt, read the feature story “HomeCourt brings the passion of sport to adidas retail” on www.adidas-group.com