Dolphins at home off Marina Alta and Baixa 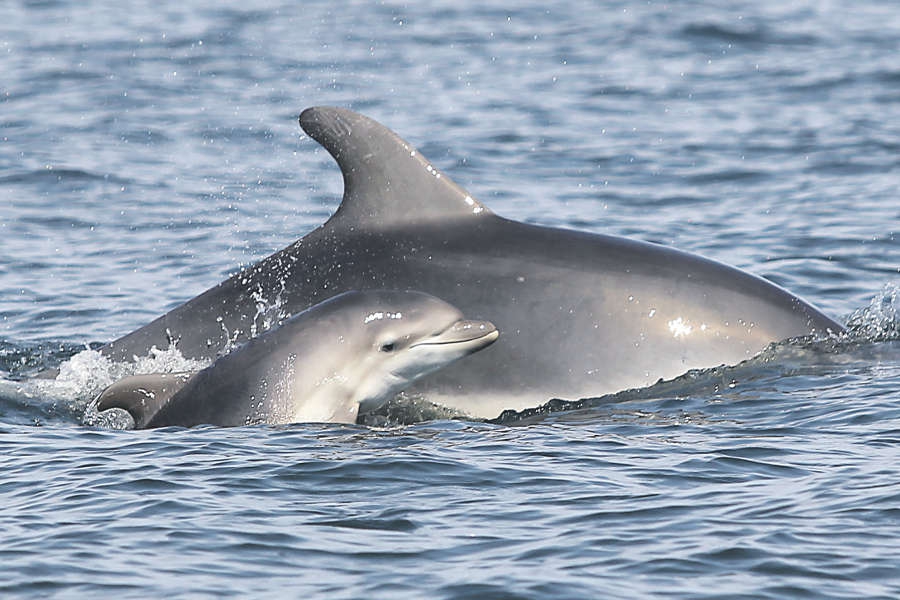 STAYING CLOSE: A baby dolphin swims alongside its mother.

A GROUP of about 30 dolphins have settled in the waters off Marina Alta and Baixa, travelling the coast between Villajoyosa and Denia with the offshore fish farms believed to be acting as a draw to the mammals, according to experts.

It has been noted that while dolphins usually travel in pods of around 12 members, the group off the coast in the province consists of about 30, a phenomenon that has attracted the attention of biologists who are seeking to explain the larger than usual pod through study.

One theory is said to be that due to the concentration of fish farms in the waters more dolphins are attracted to the area. Sea bass and bream that are bred at the farms are ideal food and they are also able to feed on other fish drawn to the farms for the same reasons as the dolphins, like mackerel and butterfish.

Studies have been ongoing for over 10 years, including at the Serra Gelada Natural Park, which is one of the main areas where dolphins like to roam.

Investigations have been carried out to determine the exact number of dolphins through photo identification, a process whereby scientists take photos of the fins of the mammals for positive identification, and the public are encouraged to do the same should they see a dolphin whilst out at sea. It is a difficult task as they only surface to breathe and then disappear under the water again so you only have a few seconds to take the photo.

One of the farms that has collaborated in the research is Basademar in Altea. A number of years ago they had reported seeing the dolphins on a daily basis; however, more recently they report only seeing them once every 15 days or even just once a month.

The arrival of Bluefin tuna in the area is said to be one of the contributing factors for their absence, because it is a far faster predator that is more capable and efficient at hunting fish at the farms, so the dolphins tend to stay away from the competition.

Studies carried out by Valencia’s Oceangrafic Institute using hydrophones that capture noises made by dolphins illustrate that they are also more active at night, when there is less human activity on the water.

This reporter has witnessed the pod on numerous occasions over the years while out paddleboarding off the coast of Moraira, Benissa, Calpe and Javea. Usually earlier in the morning and approximately two kilometres offshore, the group is quite large and inquisitive about my paddleboard.

Some of the larger males check me out by swimming directly underneath me and spinning upside down to get a better look.

Whenever a powerboat or jet-ski is within a kilometre or so they tend to disappear, resurfacing and continuing to swim alongside my board when the craft is out of sight.

This year I also witnessed the group with a number of young swimming alongside their mothers, which could be a reason for the males checking me out to ensure I pose no threat to the young.