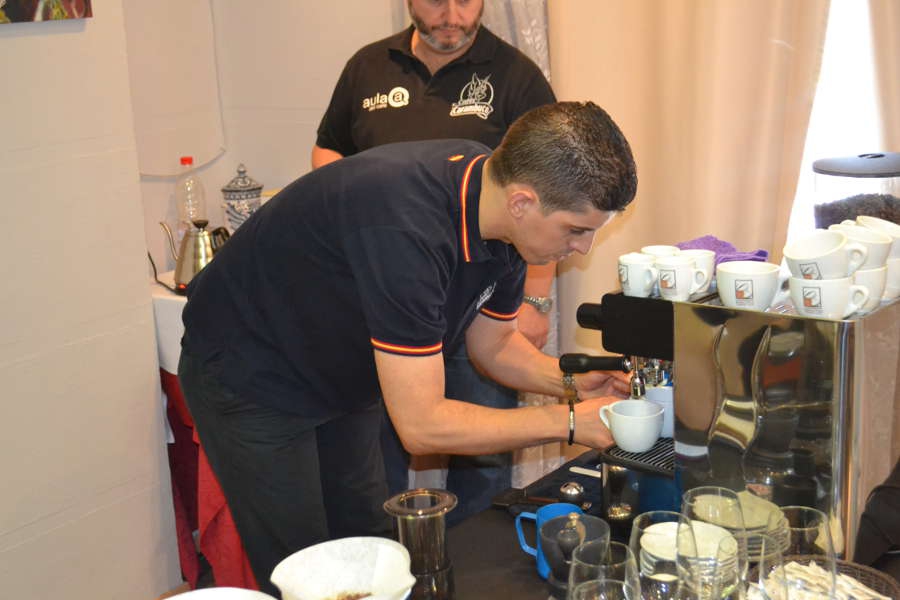 RABI AOUAM, the recently confirmed best barista in Andalucía, was in Malaga on Thursday, October 8 with a preview of his coffee skills before the national competition begins in Malaga on October 14 and 15.

The 2015 Andalucía champion will be among the 17 top baristas in Spain competing to win a national title in the two-day event held at the Palacio de Congresos de Malaga. Aouam attended the official presentation of the competition at Cafe Central in Plaza de la Constitucion on Thursday morning to highlight Malaga becoming the national capital of coffee this October.

Leading up to this month’s competition, around 200 coffee professionals competed in events around the country leaving 17 of Spain’s best baristas for the Malaga finals. On October 14, all will participate and in the grand final on the next day, six baristas will compete to become champion of Spain.

The event is an opportunity for the people of Malaga to learn more about making and appreciating good coffee. Four judges will be at Malaga’s Palacio de Congresos as the participants are tasked with preparing four espressos, two cappuccinos, two special drinks with a coffee base and two more with an espresso base and with an alcoholic mixture.

Andalucía champion Aouam wowed judges in the earlier competition this year with his innovative presentation and he said that he is prepared and calm ahead of the contest and will do his very best to become national champion.

Rafael Jauregui, Director of Cafes Carambuco, told us that, after 30 years in the industry, coffee is his life. He backs Aouam for the win and believes that the event will lead to more interest in speciality coffee in the area.

Mr. Gross highlighted the importance of the 10th anniversary of the competition being held in the city and how the event will put Malaga on the map for coffee.

The Deputy Mayor emphasised that all participants and visitors to the event would be made very welcome in the city.