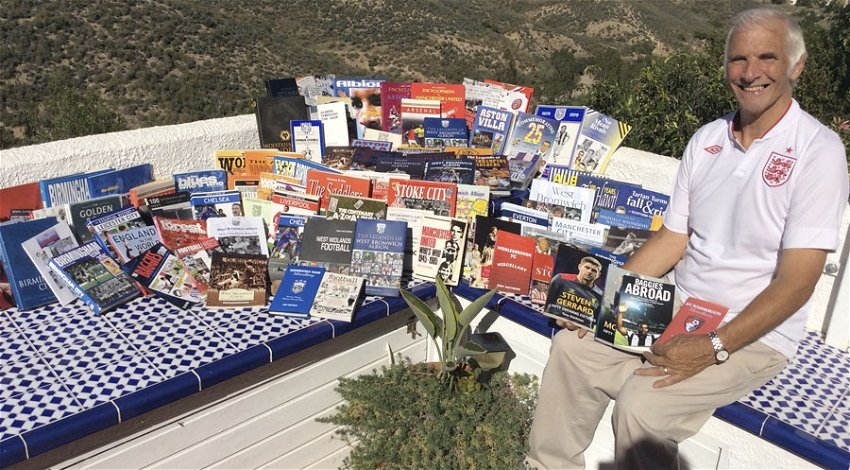 Tony Matthews, believed to be the world’s most prolific author/writer/co-compiler of football books, has just signed a contract to produce his 150th, entitled ‘Sir Bobby Robson: 50 Defining Fixtures.’ This will be released by Amberley Publishing, Stroud, Gloucestershire, next year.

Having written similar books about Jose Mourinho and Steven Gerrard, Tony has three more with the publishers; Ryan Giggs, Alan Shearer (both due out soon) and also Paul Gascoigne. And right now he is busily working on a similar publication appertaining to the career of striker Cyrille Regis who, of course, played for West Bromwich Albion, Coventry City, Aston Villa and Wolves, winning the FA Cup with the Sky Blues in 1987.  And two other books recently published under Tony’s name are The Bournemouth FC Miscellany and Baggies Abroad (mini match reports of every game played by WBA off the British mainland).

Tony said: “An awful lot of research goes into compiling a book of ‘50 Defining Fixtures.’ I enjoy every minute of it, really, but it can also prove to be a bit of a nightmare, especially when you have to choose just fifty out of perhaps 500, 600 even more games that the player in question has appeared in.

“Sorting out 50 for Giggsy was certainly tough as he played in over 1,000 games for Manchester United and Wales. Selecting Shearer’s half-century out of the more than 800 matches he played also proved hard going, so too did Gazza’s; he had 435 outings. But with the help of several diehard, efficient and, indeed, helpful supporters, footage from Youtube, a variety of matchday programmes and quite a few newspapers, I got there eventually.”

The photograph here shows Tony, at home in sunny Spain, with a selection of the football books he has had published since 1975. Over 30 have featured his home town club, West Bromwich Albion in one form or another. Forty years on and still going strong, he is hoping that soon he will receive confirmation that he has been recognised in the Guinness Book of Records.