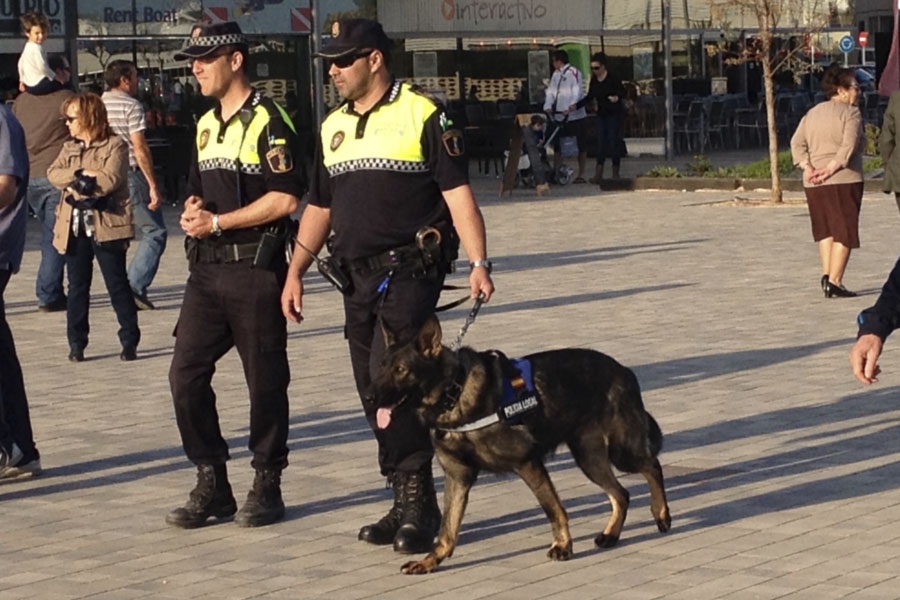 The canine unit at the Local Police in Alicante has been operational since 2012 with a team of eight dogs who have already assisted police in making over 110 arrests for drug trafficking. Incredibly more than half of those arrests have been attributed to two dogs in particular, named Inka and X.

The Canine Unit Local Police Alicante has been fully operational since July 2012 and has already arrested more than a hundred people for drug trafficking according to the National Association of Local Police dog handlers. More than half of these arrests have been made thanks to the refined sense of smell of ‘’Inka’ a female and ‘X’ a male, both German shepherds, who are two of a team of eight dogs in the group.

To reach this outstanding level of efficiency, the leaders of the Canine Unit have to spend many hours of training and have plenty of patience to achieve something that seems very complicated. The handlers receive the dogs at just three months, and by the time they are a year and a half, have been successfully trained to recognise and distinguish between specific odours including hashish, marihuana, cocaine, amphetamine, LSD, speed and other narcotics found on the illegal black market. Usually dogs are trained to detect at least eight different drugs. Handlers put the dogs to the test by attempting to camouflage the drugs with other odours during their training, however, dogs such as Inka and X have shown the effort is worthwhile by uncovering so many drug dealers.

One example of a positive result was Inka discovering a blind man on a bus carrying over half a kilo of marihuana mixed in with dog food biscuits, an attempt to disguise the odour and prevent detection. The man was arrested and reported to the ONCE who subsequently withdrew his guide dog. Another case saw a man who was carrying over 10 kilos of marihuana on a bus in Benidorm arrested after being discovered by the dog.

The bus station of Alicante is one of the points where the Canine Unit Local Police is highly active, searching coaches that come in from different parts of Spain and in particular from Andalucia.

The police have stressed the importance of drug prevention and trafficking at schools and in parks, where unscrupulous traffickers have been discovered selling thumbnail size amounts of hashish and marihuana for as little as one euro to young people. This is an important area of work for the police and one where the dogs excel.

Police dogs stay with their handler throughout their working life and once they are at retirement age, at nine years old, they are given over to adoption, with the handler being given precedence, since a strong bond usually forms between handler and dog after so many years working together. In the case of Inka and X, the handlers state that there is no doubt they will stay with them.