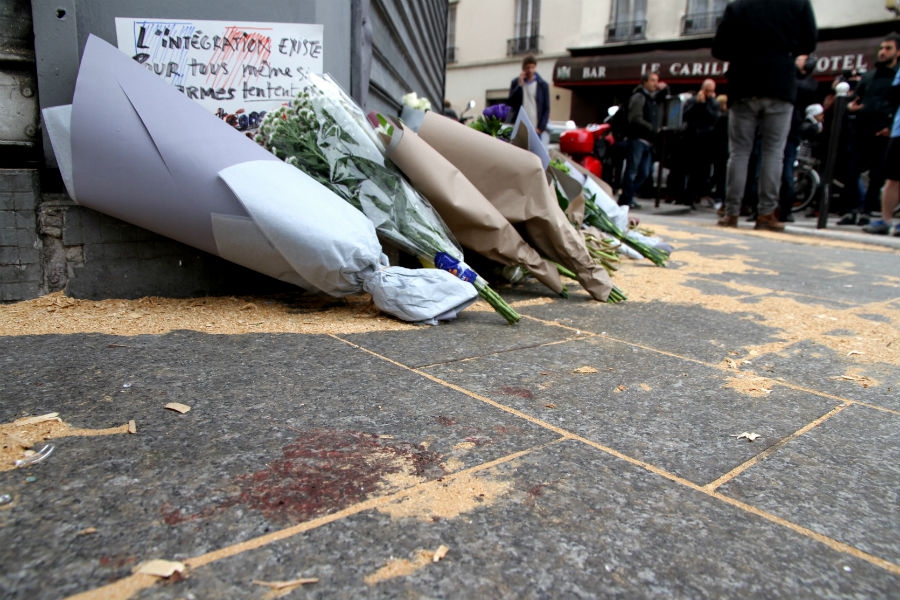 Impromptu shrine outside Le Petit Cambodge restaurant, scene of a number of deaths

UPDATE Several kalashnikov automatic weapons have been found by French police in the abandoned black car which they discovered in the Paris suburb of Montreuil and this may explain the reason that those arrested at the Belgium border, if found to be associated with ISIS, were unable to complete their part of the attack.

AS investigators have had more time to study the events of the night of November 13, they have decided that there were three active groups consisting of seven, not eight men as originally thought.

It is possible that three men arrested by Belgian police at their border with France may have been fleeing from the scene and were part of a fourth cell which for some reason was unable to make any attacks on Paris. The French police have found a black car in Paris that one of the men arrested in Belgium is said to have rented.

In a gruesome release from French authorities, they have confirmed, following a check on the DNA found from the finger of one of the suicide bombers, that he was Omar Ismail Mostefai, a 29-year-old French citizen of Algerian origin.

Six people close to him including members of his family were reportedly taken into custody on the morning of November 14 and his older brother voluntarily visited the police.

Reports suggest that a second man involved in the massacres had also entered the EU via Greece as a supposed refugee.

The death toll now stands at 129 with 350 injured and President Hollande has announced a three day period of National Mourning.