Use Polytunnels for vegetable productivity and frost protection 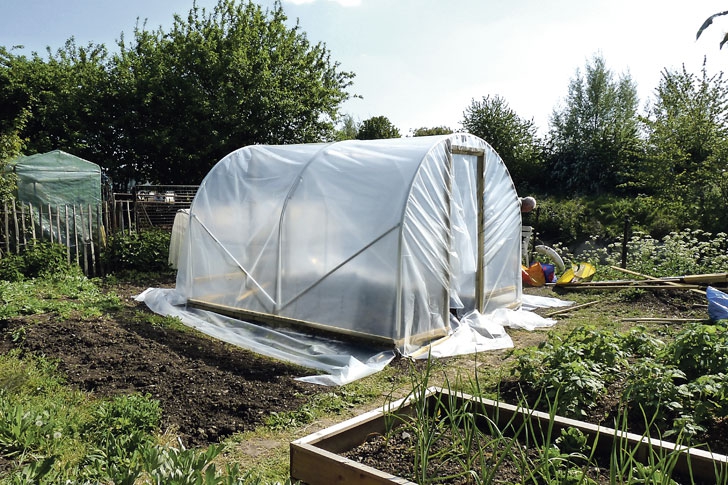 They become more popular each gardening year in the UK and can also be useful in Spain, especially the large walk-in frame tunnels covered in plastic sheeting for growing a wide variety of crops, from lettuces to tomatoes and raspberries and protecting potted plants during the frost-risk months.

The size is in theory whatever you like, but typical sizes for  plots are widths of two to five metres and lengths of two to 20 metres.

A minimum workable height at the centre of the tunnel is two to two and a half metres. There are two basic designs available to buy, semicircular arc and high tent shape. Well designed, constructed and maintained, they can last for years. By the way, we have found two common spellings Polytunnel and Poly Tunnel. Use the one you are most comfortable with.

• Crops grow quicker, earlier and possibly larger. The latter depending on your harvesting strategy, small is tender or giant could be a silver cup.

• They are per square metre less expensive than glass or polycarbonate greenhouses.

• There is a wide range of sizes available.

• They absorb the sun and achieve the most productive germination and Spring growing temperatures two to six weeks ahead of the open garden according to your location.

Splitting the growing area into zones, a multi-zone irrigation system will allow you to give blocks of small and large vegetables, soft fruits and tender fruit trees the water they need.

Kits to allow liquid fertilisers  to be metered into the irrigation water system are also available.

What to look out for when buying a polytunnel:

• Ultraviolet resistance and quoted lifespan of the sheeting.

• Possibility of fitting a temperature controlled fan so you can use it through the hottest months. You will be surprised how hot the inside of a polytunnel can become on a sunny day from June to August.

• Ability to partly roll the sides up in the summer if you don’t want the cost of a fan.

Risks to your investment:

• Planning laws need to be checked before construction.

• Poor fixing and air seal at soil level to stop strong winds getting under the plastic and ballooning it.

• If you don’t use ecological insecticides and fungicides you may build up an environment that is a health risk.

Prices vary so check out several suppliers. If you are a handyman metalworker and have a supplier of wide plastic sheeting you could rig up a serviceable DIY Polytunnel.