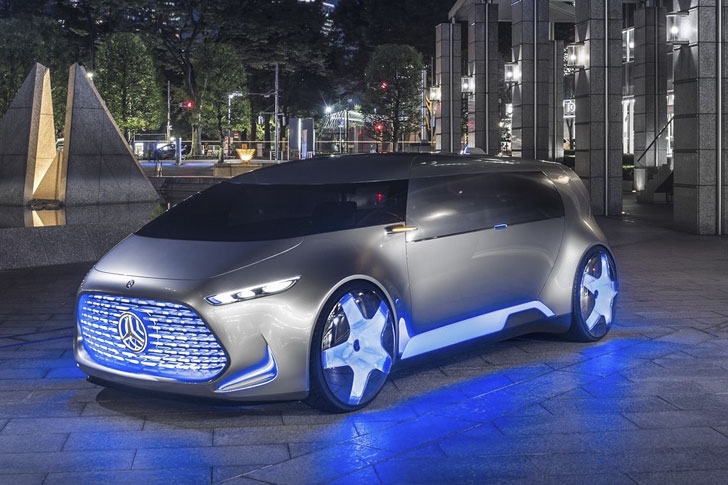 WITH the Tokyo motor show in full swing this week, and taking a browse through the plethora of shiny toys on the stands, there seems to be an even more defined line this year between what I would call a car, (a fire breathing V8 track monster,) and what the Playstation generation will be driving very soon.

I believe the term for people born after 1995 is ‘Generation Z’, people who have grown up with the internet, smart phones and an overriding sense of responsibility for the environment. It would seem that these people don’t so much need a car as an iPhone on wheels, an extension to their digital, social media, networked world… a Buddy!

Mercedes Benz have obviously noticed that not everyone uses spanners and an oily rag at the weekend, and reacted to the market and the way things are destined to be with two of the stars of the show. Firstly for Techie Tim; the latest in their concept car cupboard that addresses the future of autonomous travel… The Vision Tokyo.

Not so much a car as a lounge space that moves, this vision of the not too distant future is everything iPhone Iand ever wanted. Looking like a friendly, sleeping puppy dog is the key to its image, in that it is designed to be your friend, not your car.

With a sofa that wraps around a central entertainment space and an enormous entrance panel which doubles as a large video screen, the interior is very much a cool living space while the driving area is relegated to being a control wheel should it ever be needed.

The systems connect you with the cars ‘Deep Learning’ abilities, which adapt and customise itself to your preferences, while learning to simplify your life and journeys. It boasts a power source from a hybrid hydrogen fuel cell and inductive electric charging system which has zero emissions.

The concept clearly shows us that the future will demand a lot less of the driver, and offer a whole new level of relaxed comfort. However, for the diehard petrol head, Mercedes also want to prove that they have the last word in the ultimate dream machine. Also on display is the new Mercedes AMG GT3.

The new thunderous track animal will still use the 6.2 litre M159 lump while the road going version is treated to the new M178 twin-turbo 4.0-liter V-8.

Star Wars looking carbon fibre wings, vents, air dams, scoops and a roll cage aside, the road going version will be virtually the same apart from using a seven-speed dual-clutch transaxle instead of a race-grade six-speed sequential box… Oh, and a cup holder.