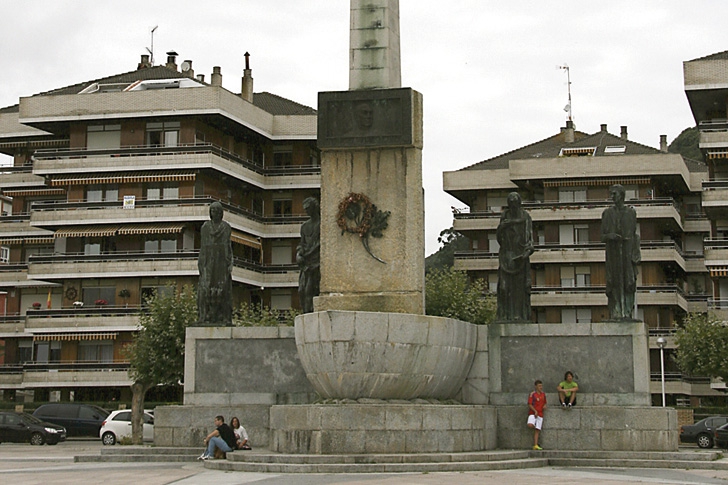 SANTOÑA (CANTABRIA): The monument to Carrero Blanco in his birthplace.

AS Spain digests its Christmas Eve dinner and politicians digest the election results, spare a thought for December 20, 1973.

That was when the car of Spain’s Prime Minister Admiral Luis Carrero Blanco was blown up in Calle Claudio Coello in Madrid.

He was returning home after Mass as he did each morning in his official car, a black Dodge, and his unvarying routine made him an easy target.

The attack was carried out by ETA’s five-strong Txikia commando and took more than a year to set up.

The choice of Carrero Blanco was an obvious one, he had been a close adviser to Franco since 1941, when he came to the dictator’s notice after writing a report advising against entering the Second World War on the side of the fascist Axis.

The aging dictator, who boasted that all loose ends were ‘tied up and well tied up,’ trusted that on his death Carrero Blanco would ensure that the Movimiento, Spain’s only political organisation, survived after Prince Juan Carlos was proclaimed King.

So what was in Franco’s mind when he began his Christmas speech that year with the phrase: ‘No hay mal que por bien no venga?’  Using the equivalent of ‘It’s an ill wind that blows no good’ generated inevitable conspiracy theories.

How could the ETA commando spend a year in Madrid setting up the plot to kill Carrero Blanco without detection?

Why did Henry Kissinger, the US Secretary of State, visit Madrid two days previously?

Better still, Carlos Arias Navarro, the former Interior minister who replaced Carrero Blanco as prime minister, was nominally in charge of providing him with protection, and should have uncovered the plot, it was suggested.

Two years later, Franco was dead and Arias Navarro would be in office for only a few months more. He was replaced by Adolfo Suarez who, together with Juan Carlos I, steered Spain to democracy. But that’s another story.