The night of the Three Kings 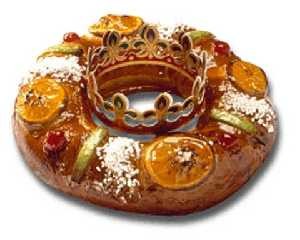 A prize baked inside

The Three Kings’ Cake is a sweet bread that is covered with dried fruits and sugar. Baked inside is a small prize as well as a bean. Whoever finds the prize is supposed to be king or queen for the day while he who ends up with the unlucky bean is expected to pay for next year’s Kings’ Cake.

KNOWN as the Epiphany, El Dia de los Reyes and in English, Three Kings Day, the night of January 5 and the whole of January 6 are considered as magical times for children and shops alike!

As Santa Claus (Papa Noel) becomes more popular in Spain, many children are now finding they have two nights in close proximity when they receive presents and shops around Spain are doing their best to encourage the practice.

The main excitement on January 5 comes after dusk has fallen and parades start to appear in the streets of villages, towns and cities throughout Spain.

Their main component consists of the Three Kings, Melchior, Gaspar and Balthazar (representing Arabia, the Orient and Africa) who journeyed to see the Christ child and they are accompanied by a host of pages and helpers who throw sweets to the waiting crowd.

Nowadays, the processions have become more commercialised and you will often see floats with Disney characters, dinosaurs and even Smurfs joining in the parade, but as people often come from quite long distances to see the best procession, they do expect to see more than just a camel and two horses.

For years, Balthazar was played by a Spaniard who was covered in black make-up but in an effort to try to accurately reflect the racial mix of the country, most parades now include an African King although many ‘conservatives’ draw the line at the recently introduced concept of replacing a king with a queen.

After leaving sweet wine and cakes for the kings and their steeds, children place their shoes in a prominent place before going to bed and in the morning find them perched on top of presents if they have been good or a lump of coal if they have been bad.