He’ll always be our hero 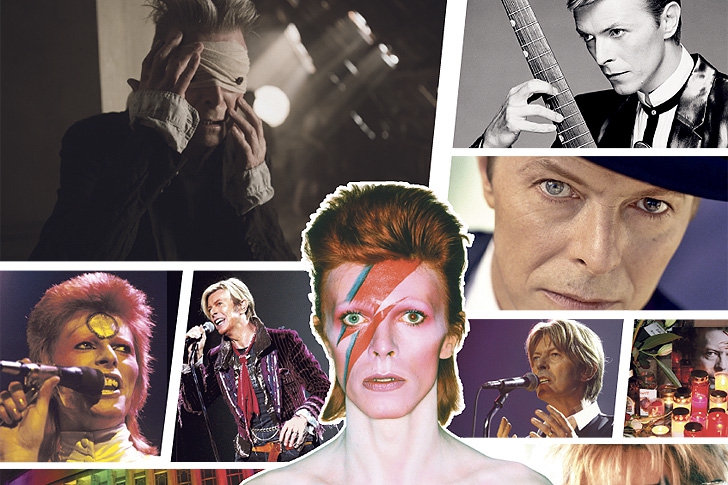 CELEBRATING the iconic life and fighting death of David Bowie

DAVID BOWIE passed away on Sunday January 10 surrounded by his family. To many he was one of the most influential musicians of his time, to the rest of us, he was simply the soundtrack of our lives.

For some five decades, there has rarely been a year when Bowie hasn’t been in our homes, our cars or on the big screen. His unique provoking talent has been a calming backdrop to our daily routine for as long as we can remember.

Possibly the most vital musician of his generation, his chameleon-like ability to reinvent himself creating new personas that transcended popular trends saw him evolve from his flamboyant alter ego Ziggy Stardust, through the glam rock and art rock era, on to soul, hard rock, dance pop, punk and electronica.

Mastering, leading the way, and then taking to another level all his music, his free spirit unbound by the constraints of fashion or public opinion, he developed a talent and vision that set him above mere mortals, a talent that gifted him the ability to live in a wonderful parallel universe and show us what it would be like if it were our own.

His vision of the planet Earth as an outsider was obviously a big hit with millions of fans around the world. During his eclectic 40-plus-year career Bowie has become a British music icon, the sound and spectacle like no other has led to the influential singer-songwriter and producer selling 140 million albums, releasing 111 singles, making 51 music videos and 25 studio albums.

With his passing, long-time friend and producer Tony Visconti said: “His death was no different from his life – a work of art.” He went on to add that his latest album,  released on his birthday last Friday, was a ‘parting gift,’ it was a goodbye note to the world, for those who could not be at his side when he died.

David is survived by his wife, the model Iman, whom he married in 1992, his son, director Duncan Jones, and daughter Alexandria.

In a sombre unique way that only Bowie could dream of, knowing the changes that were about to happen and having 18 months to plan how to secretly bow out gracefully, David Bowie said goodbye to the world in pure style.

Knowing what we know now, people are beginning to realise that David Bowie didn’t just release his last album ‘Blackstar’ to coincide with his 69th birthday last week on January 8, he was using it to say goodbye to the world.

Watching the track Lazarus, it would appear only too clearly that Bowie has used it to express his feelings about his illness, death and saying goodbye. His first words, “look up here, I’m in heaven/I’ve got scars that can’t be seen,” were intended to speak to us after he had gone.

In the video and after Bowie begins to float above his hospital bed signifying his soul leaving his earthly body, another Bowie figure appears dressed in black and looks on as the original frantically scribbles notes in a race against time.

AGED just 17, a young David Bowie appeared on a black and white BBC programme to defend his and others’ hairstyles. As the founder of The Society for the Prevention of Cruelty to Long-Haired Men, Bowie told the presenter “It’s not nice when people call you darling and that.”

A FIGHT over a girl led to Bowie’s famously differently appearing eye colours. George Underwood, one of his oldest friends whacked him when they were 15-year-old high school boys. Bowie later thanked his friend for leaving him with Aniscoria, with one pupil permanently dilated, as his ‘alien eye’ became a signature feature.

MAJOR TOM is a fictional character who has appeared in no less than three Bowie hits, Space Oddity in 1969, Ashes to Ashes in 1980, and 1996’s Hello Spaceboy. Other alter egos included Aladdin Sane, the Thin White Duke, Tao Jones, Halloween Jack, John Merrick, and of course Ziggy Stardust.

A DUET with American legend Bing Crosby of ‘The Little Drummer Boy’ was recorded in 1977 for a TV Christmas special and would be Crosby’s last-ever single. Bowie was reportedly reluctant to sing the song itself, telling the producers, “I won’t sing that song. I hate that song. I’m doing this show because my mother loves Bing Crosby.”

NOT one for royal awards, Bowie turned down two huge British honours, as Commander of the British Empire (CBE) in 2000, and a knighthood offered by the Queen in 2003. He later told the Sun newspaper “I would never have any intention of accepting anything like that. I seriously don’t know what it’s for.”