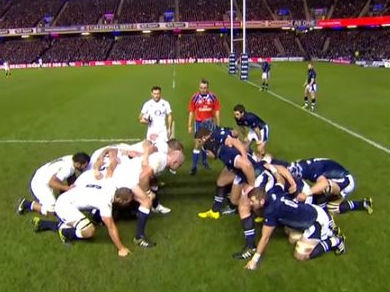 NEWLY appointed England manager Eddie Jones kicked off his era in charge with victory over Scotland at Murrayfield.

Under the spotlight of the Calcutta Cup, an annual fixture between the two sides, the former Australia manager secured a 15-9 win.

Four months on from a forgettable World Cup on home soil, England were under pressure to get the RBS Six Nations campaign off to a good start, and established an early lead through George Kruis’ converted try.

The visitors were pegged back by the foot of Scottish captain Grieg Laidlaw, who scored two penalties to make it 7-6 at half-time.

A missed penalty by Laidlaw at the start of the second half was just one of several promising openings that the hosts failed to capitalise on, after which England’s strength from the substitute’s bench helped them to establish a grip on what had been a tempestuous affair.

A stingy England defence, led by much-maligned Dylan Hartley, reduced Scotland to a just a handful of half-opportunities. The oft-disciplined 29-year-old, who was surprisingly awarded the captaincy by Jones, put in an impeccable performance, surely aware of the intense media focus on his behaviour.

“It’s huge, I’m more happy that we won as a team”, an exhausted Hartley said after the final whistle. “Put the personal stuff aside and I’m just chuffed to be out there with the team”.

After the game, Jones expressed his happiness with his star player’s performance.

“It was a difficult game for him as captain and I think he did really well,” he told the BBC after the match.

“In all honesty I always thought we would win the game,” Jones added. “The only way we weren’t going to win the game is if we did something silly.”

Scotland, it seemed, were still reeling from their controversial loss to Australia in the quarterfinal of last year’s Rugby World Cup. “I thought we created opportunities, but we just didn’t finish them off,” Scotland coach Vern Cotter said to the BBC after the match, promising, “There’s a lot more to come from this team.”

In the early match France scored late to beat Italy 23-21, despite trailing for most of the match.