Mojacar’s fountain alludes to an exciting past where villagers met! 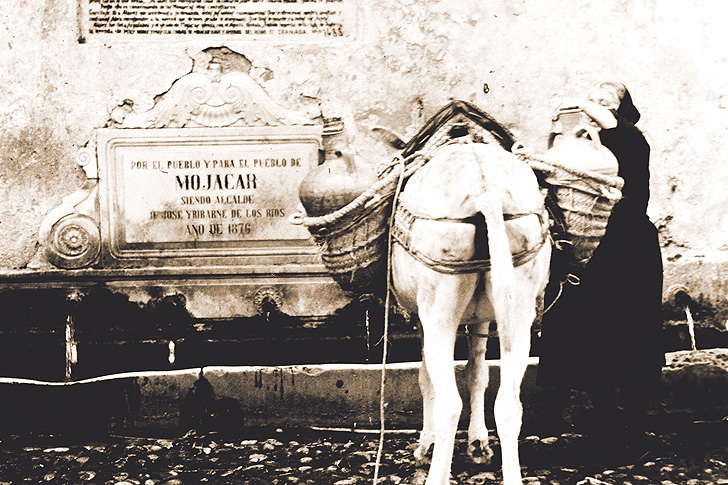 THE FOUNTAIN: Villagers met to barter.

ROMANTICALLY true, but historically has never been proven with documents

‘Dispel historical illusions and there is an end to half the charms of travelling.’ So wrote Washington Irving, saviour of Granada’s famed Alhambra Palace and first Ambassador to Spain from the United States.

There is no better reason for visiting Mojacar than to amble the narrow cobble-stoned streets, close your eyes momentarily and cloak yourself with fantasies of past glories. The legendary pueblo veiled in ancient history and still held in awe for its ancient Moorish traditions is still an inspiration to writers, poets, musicians, craftsmen, historians and inquisitive friends.

Naturally, everyone arrives armed with a camera to capture ‘living proof’ of the town’s celebrated past. So, where does the initiate begin? There is no better place than the central fountain with its constant flow of life giving water to nourish the parched land.

For it was at the fountain where the villagers met to barter, discuss politics and retrieve the life sustaining liquid.

Therein can also be viewed the commemorative memorial dated 1488 that narrates the fable that every Mojaquero repeats: why Muslim Mojacar was allowed to keep its religion and customs.

Just some 510 years ago the ‘Reyes Catolicos’ were encamped near Antas. Christian forces had cut off the area’s supply road from the Arab stronghold at Baza. Historians list them as 11,000 foot soldiers and 2,000 cavalry.

On June 10 of that year the Arabs had no other escape but to surrender. When Vera fell, soon the town alcaldes of Antas, Bedar, Serena, Cabrera, Teresa, Lubrin, Sorbas, and Las Cuevas made the trek to pay rendition and pledge allegiance to the Catholic crown. Mojacar didn’t.

The faded marble plaque tells the story. A dashing young and unarmed captain rode to the foothills below the village stronghold to beseech the Farique Alibez to surrender. The presumed dialogue took place between youthful Catholic Captain Garcilaso and the Moor, Alibez who spoke saying: “I am an Español just as you are. My race has lived here for more than 700 years and you say I must return to Africa. If I do that, they will say I am an extranjero coming from the sea, and I will be because this is my land.

“I have never carried swords against the Christians. If you will treat us as brothers and not as enemies and allow us to labour in the fields of our forefathers we will remain as friends. I ask this of the illustrious Doña Isabel and Don Fernando from the bottom of my heart, and in return promise that we will be loyal to the Christian kings.

A decision was made and Mojacar remained Moorish. Romantically true but historically never proven.