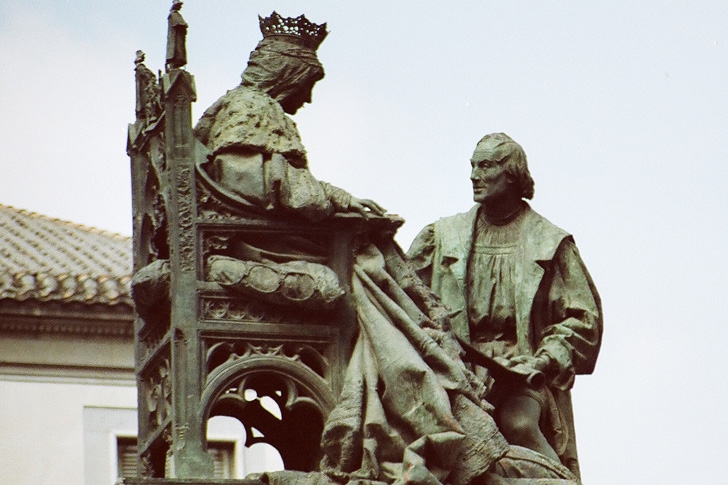 IMPORTANT STATUE: Memorial in the centre of Granada City.

IN the centre of Granada City is an important statue with none other than Mojacar’s same Garcilaso name carved at the bottom of this most central memorial.

Local historians will tell you that the statue is to serve notice where Colon was stopped leaving town after the queen had rejected his offer to find the new worlds. Queen Isabel had changed her mind and had Colon called back.

Who was this fearless adventurer whose name is embossed forever on the tablets of history of both Granada and Mojacar?

In the year 1490 King Ferdinand was encamped just outside Granada’s Alhambra Palace preparing his final siege. His queen had recently arrived from Cordoba bringing money and reinforcements, a signal to the Arabs that the Christians would stay until Granada had fallen.

After a few days the Queen asked to be taken across the plains (vega) to a vantage point near the fortress so that she might view the famed citadel.

“However the Moors were appalled by the colourful scene of pageantry and poured forth from their gates their soldiers and cavalry. Time and time again the Moorish cavalry charged and brandished their lances and scimitars defying the cavaliers to single combat, but not a soldier budged nor transgressed his orders.”

One such Muslim was more insolent than the rest. This was none other than ‘El Tarfe the terrible’ a vicious man who hated the Christians and never took prisoners. Tied to the tail of his stallion and trailing in the dust was the variant inscription ‘AVE  MARIA’.

“One young captain was embarrassed by the insolence and spurred his horse to the king. He threw himself upon his knees and sought permission to accept the defiant and insolent infidel. Garcilaso remounted his steed, closed his helmet graced by four silver plumes, grasped his buckler of Flemish workmanship and his lance of matchless temper and defied the Moor.”

The fight was vicious. Both wasted two different set of lances before they fell upon each other with swords. The Moor, even though exhausted, appeared as the superior force and slashed with his Damascan Scimitar at the Christian on the ground.

As El Tarfe had raised his arm to strike, Garcilaso, using a shorten sword pierced his adversary in the heart. The gallant knight then mounted his steed and with the banner of Ave Maria tied to his sword he bored off a single triumph amidst the rapturous shouts of the Christian army.

There upon the plains (Vega) of Granada his name and history were changed forever. He became Garcilaso de la Vega.