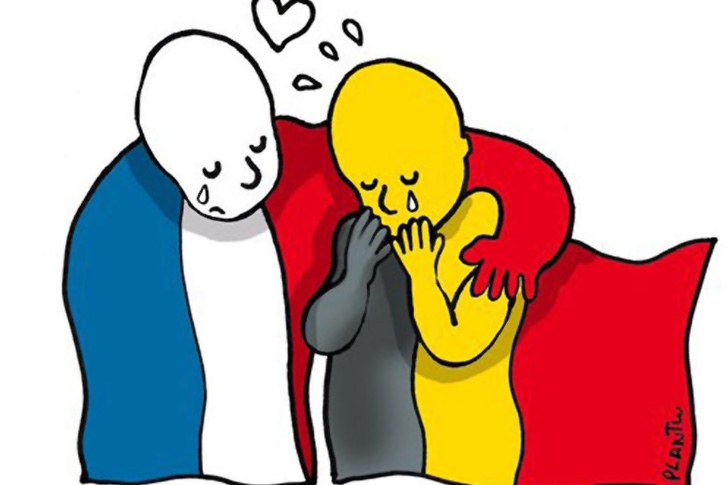 Support from the French and the rest of the world is profound.

THE WESTERN WORLD is coming together on social media platforms to show support after the shocking terrorist attack in Brussels earlier today, March 22.

Currently the death toll remains at 34 with nearly 200 wounded in apparent co-ordinated explosions; one in the airport and the other at the metro station.

As the news broke around the world, Facebook´s safety check function appeared online which allows users to notify friends and family that they are safe.

Twitter hashtags have begun trending to show support for the people of Brussels, tags include #prayforBrussels and #OpenHouse.

An image showing the colours of the Belgium flag with a plane in the foreground has been re-tweeted by thousands of users already, mirroring the support shown on social media for Paris after the attacks four months ago.

There was also widespread support from French accounts such as @Paris and @LeMondefr.

French publication, Le Monde tweeted a drawing of a person draped in a French flag and another in the Belgium flag whilst crying and hugging each with the dates written underneath.

The attacks closely follow the arrest of the Salah Abdeslam on Friday, one of those wanted for the Paris attacks. There are also reports surfacing that Daesh are taking responsibility for the attacks.

With images of Tin Tin, the Belgium cartoon character and Mannekin Pis (the Brussels statue of a little boy peeing) prominent on social media, Twitter was also useful in making appeals for blood donations at hospitals across Brussels.

Whilst support online is powerful, people on the ground are also keen to help in a practical way. In Brussels residents are opening their homes to those affected by the attacks, offering somewhere to relax and a hot drink.

World leaders have been tweeting and showing their solidarity in response to the attacks. David Cameron has been very active on his Twitter account.

He tweeted:  “I am shocked and concerned by the events in Brussels. We will do everything we can to help,”

And continued: ´´The terrorists behind today’s atrocities attack our way of life and they attack us because of who we are. We will never let them win.´´

Trump, Obama, Putin and Merkel are a few other prominent figures to show support through social media platforms.

Whilst Pope Francis prayed for the victims of the attack and their families and said: “The Holy Father again condemns the blind violence that causes so much suffering and implores God for the gift of peace.”