Wearing kilts can damage your brain 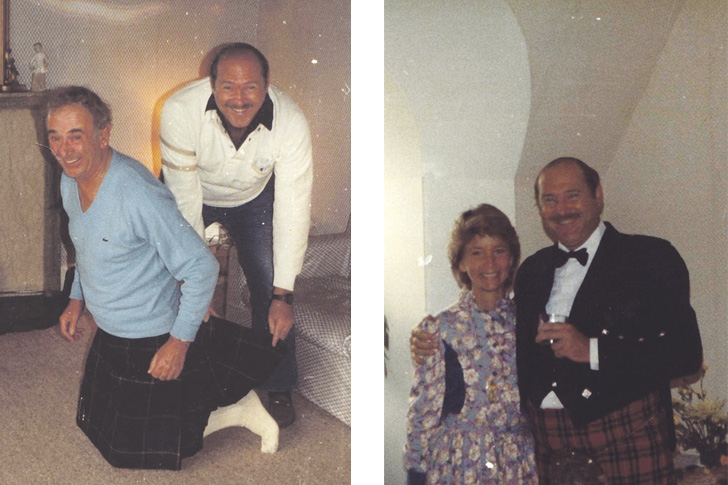 SCOTTISH WEDDING: Wearing a kilt was not so fashionably easy.

IT was a quiet Saturday and I was sitting in my office in the Gaviota complex. Suddenly the door flew open and in popped my friend and business associate Bill Hyman. “Ric, I’m in love. You gotta meet this girl. She’s in the bar now… come across.”

I had never seen Bill so anxious before so off I trod to inspect the situation. He introduced me to a petite Scottish lady, terse in her comments but totally in control of the situation of fending off her fawning admirer Bill.

He indeed was swept off his feet and could barely contain his effervescence and happiness. A drink or two and she departed. Bill immediately announced that he was going to marry her. And that came to pass as predicted.

As the wedding was to be in distant Scotland it was agreed that Bill and I both being Yanks must attend with aplomb and dignity; wearing kilts. Sounds fashionably easy, but not so in real life. Renting the rig was no problem; wearing it was.

The first factor was the authenticity of the bearing. Fresh. Once resolved there was nothing else to conclude in my mind, other than being corrected to swivel the pleats behind me. Naturally knocking back as much whisky as we could get down our necks helped our bravado. But I supposed that’s what being a true Scot was all about! And I talked just like em, that is, no one could understand me.

The second faux pas was not learning to sit wearing the outfit. At the register I just plunked myself down in the first row waiting for my turn to sign the wedding document. When called forward the damn kilt had wadded itself up into an unpleasant ball, pleats clinging to my bare backside so when I leaned over to sign I exposed a fresh full moon to all blushingly present.

Kate’s background as a dancer had been with many celebrities. That and the fact her childhood neighbour was none other than Ronnie Corbett, whose wife was too in shame faced attendance. That fall she visited us for a week in Mojacar. The next summer I took my family back to Edinburgh for a summer thrash about the hillsides. Drove all over but finally quit as the distilleries were getting further afield and some even hidden on some small islands so we returned to our loaned house of the Hyman’s three days early.

We weren’t there but two minutes and the phone rang. It was none other than the little big man himself Ronnie Corbett inviting me to golf at his club Morningside. Well, I had seen that name posted on a club on the West coast near Oban so politely declined. It was “just too far for me to drive” even for a game with the great comic.

It wasn’t until four years later that I learned that his golf course was right on the outskirts of Edinburgh about nine miles away. Of course, a world explorer like me knew differently. And it most certainly gave Mr Corbett plenty of “lazy yank jokes to tell.” I hope you haven’t heard any?