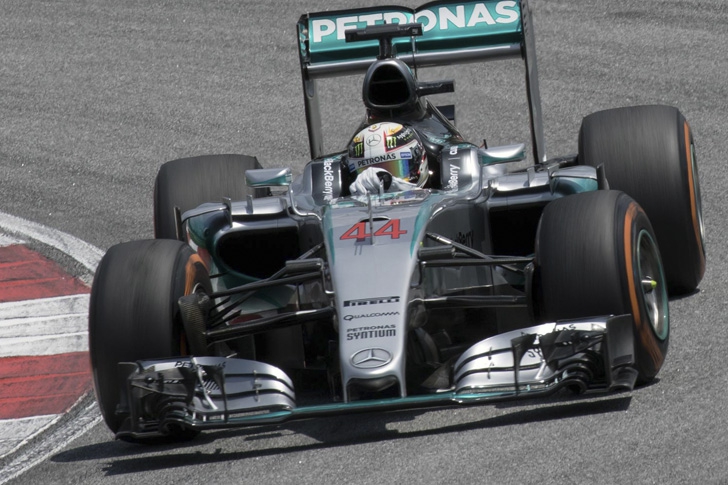 It was an unlucky day for Lewis Hamilton.

NICO ROSBERG became only the fourth driver in F1 to win six consecutive races as he stormed to victory in a dramatic Chinese Grand Prix on Sunday April 17.

The result means that he now holds a 36-point advantage over team mate and rival Lewis Hamilton after just three races in the 2016 championship.

Hamilton started from last on the grid but battled his way to seventh after stopping five times during an incident-packed race at the Shanghai International Circuit.

A manic opening lap saw the two Ferraris of Sebastian Vettel and Kimi Raikkonen collide with one another, with both requiring replacement front wings, before Daniel Ricciardo suffered a tyre blow out on lap two.

At the other end of the field, Sauber driver Felipe Nasr swerved to avoid Raikkonen but hot Hamilton, who was also forced into the pits for a new front wing.

A safety car was deployed on lap four due to debris on the track, and Mercedes called Hamilton back in to the pits, allowing him to do a single lap on the super soft tyres before using the softs for the remainder of the race.

This meant that he had pitted three times in the opening six laps, placing him third from last at the restart.

Raikkonen was just behind, in 19th, with Vettel in 15th, but by the next round of pit stops all three had made good progress, and Hamilton was third as he pitted on lap 21.

He emerged midway through the order, but the damage sustained to the car earlier in the race began to take its toll. He was unable to get past Felipe Massa in the Williams, and both Ricciardo and Raikkonen were able to overtake him to finish fourth and fifth.

Vettel fared much better, storming through the field to finish second, albeit nearly 40 seconds behind the untroubled Rosberg.

Before the race, Hamilton had predicted an “easy” weekend for his German team mate after he was handed a five-place grid penalty following a change of gear box, and so it proved.

Hamilton will hope for luck to swing his way after a disappointing start to the campaign. He said: “There is a long way to go, but I’ve no more jokers available.”

The triple world champion remained upbeat, however, adding “I definitely don’t feel the dark cloud I’ve had over me in the past right now.”