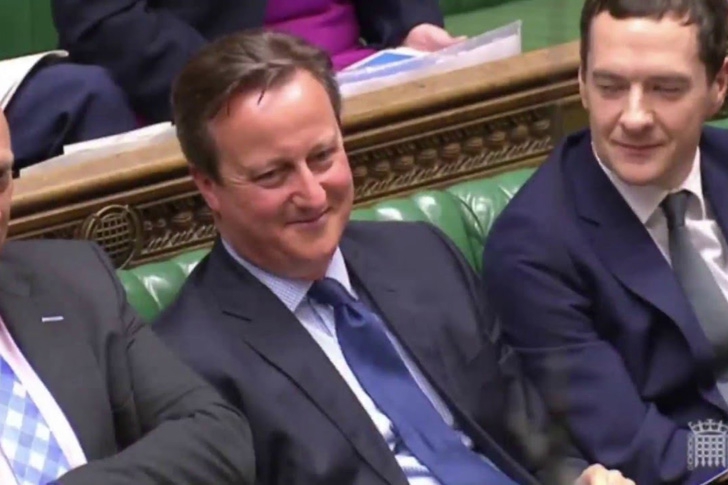 The Prime Minister used his weekly platform to join the attacks against Labour’s Muslim candidate for mayor of London Sadiq Khan.

Although Khan has repeatedly spoken out against Islamic extremism, the Tories have remained undeterred with their mayoral candidate Zac Goldsmith suggesting that his opponent would be soft on crime because he “provided cover for terrorists.”

In the Commons, Cameron laid into the Labour minister, claiming that he shared a platform with a known extremist on nine occasions.

The government leader said: “If we are going to condemn not just violent extremism but also extremism that seeks to justify violence in any way it is very important we do not back these people and we do not appear on platforms with them. And I have to say I am concerned about Labour’s candidate as mayor of London who has appeared as again and again and again…”

Following some raucous heckles, he added: “The leader of the Labour party is saying it is disgraceful. Let me tell him, Sulaiman Ghani – the honourable member for Tooting has appeared on a platform with him nine times.

“This man supports IS. I think they are shouting down this point because they don’t want to hear the truth. Anyone can make a mistake about who they appear on a platform with… but if you do it time after time after time, it is right to question your judgment.”

The Prime Minister failed to mention that Mr Goldsmith himself appeared in a photo alongside Mr Gani outside a recent Conservative party event.

Labour MPs responded with cries of “racist” as Jeremy Corbyn branded the comments as “disgraceful”, while former shadow business secretary Chuka Umuna accused Cameron of participating in a coordinated offensive against Khan.

In a jocular aside, the Prime Minister attempted a rehearsed wisecrack based on claims that fast food giant McDonalds has been banned from Labour’s autumn conference, in response to a question on education spending.

“When I read that they were going to ban McDonnell from their party conference I thought it was the first sensible decision they’ve made,” began the Prime Minister.

“But it turns out it wasn’t the job destroyer they wanted to keep away from their conference, it was one of Britain’s biggest employers.

He then dropped his punch line, cueing a series of grimaces among nonplussed backbenchers.

“No wonder Labour MPs are in despair, frankly I’m lovin’ it.”