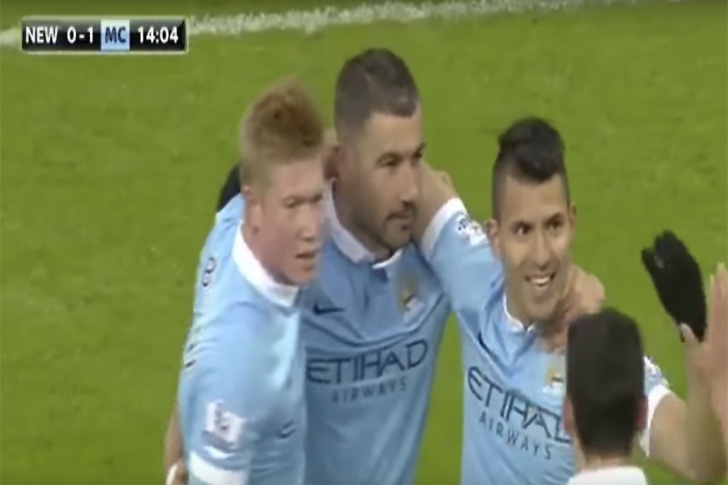 NEWCASTLE United drew 1-1 with Manchester City in the Premier League on Tuesday April 19, but may feel that they deserved more after pummeling the Champions League semi-finalists in the second half.

Sergio Aguero opened the scoring from an offside position to register his 100th league goal for City in the 14th minute, before Vurnon Anita equalized for Toon after dodging Aleksandar Kolarov and unleashing a low shot which went in off the inside of the far post.

The result leaves Newcastle second-from-bottom in the league but now only two points behind Norwich City in 17th, whereas City will be looking nervously over their shoulders as Arsenal are again in a position to overtake them in the battle for Champions League places.

In the Championship, the top of the table clash between Burnley and Middlesbrough also ended in a 1-1 stalemate.

Jordan Rhodes put the league leaders ahead with a poacher’s finish after 70 minutes, with Michael Keane rescuing a point for the home side at the death to leave them in second place, two points behind Boro with three games to play.

Charlton were relegated after failing to beat already-doomed Bolton at the Macron stadium.

Thomas Muller scored in each half to put Bayern Munich into the German Cup final as they beat Werder Bremen 2-0 to remain on course for a treble this season, and in Serie A Napoli smashed Bologna 6-0 to keep their faint title hopes alive.

Rafael Nadal will face Marcel Granollers in the second round of the Barcelona Open after the 50th seed saw off Daniel Munoz 6-4, 6-3.

Nadal, who won the Monte Carlo Masters last week, is going for his ninth victory in the competition.

Meanwhile, a Croatian umpire who was employed at the US Open despite being suspended due to a betting investigation, has been given a 10-year ban from the sport.

Australian golfer Adam Scott has announced that he will not compete at the 2016 Olympics in order to focus on the PGA Tour, while newly-crowned Masters champion Danny Willet has joined the PGA ranks following his first major triumph.

The typically self-effacing Bernie Ecclestone has said that Vladimir Putin should be in charge of Europe, Donald Trump would make an excellent US President, and that immigration has brought no benefits at all to the UK.

Speaking at an advertising conference, the F1 supremo added that female drivers would “not be taken seriously” in the sport because they are “not physically” capable to drive the cars.

UFC boxing star Conor McGregor has sparked rumours of his impending retirement following a cryptic tweet in which he said: “I aim to retire young. Thanks for the cheese.”

Switzerland is in mourning after snowboarding champion Estelle Balet was killed as she was swept away by an avalanche during a film shoot near the country’s southern border with France.

Quotes of the day

“I never meant a gun gesture. Last time I got sent off it was when the referee said I flipped him the bird, so this time I use two fingers and it’s a red again. What am I meant to do?” – Nürnberg’s Dave Bulthuis after being banned for three games for making a two-fingered ‘gun gesture’.

“You cannot use him as an orange and take each little bit of the juice” – Jurgen Klopp discusses putting the squeeze on Daniel Sturridge’s match fitness.