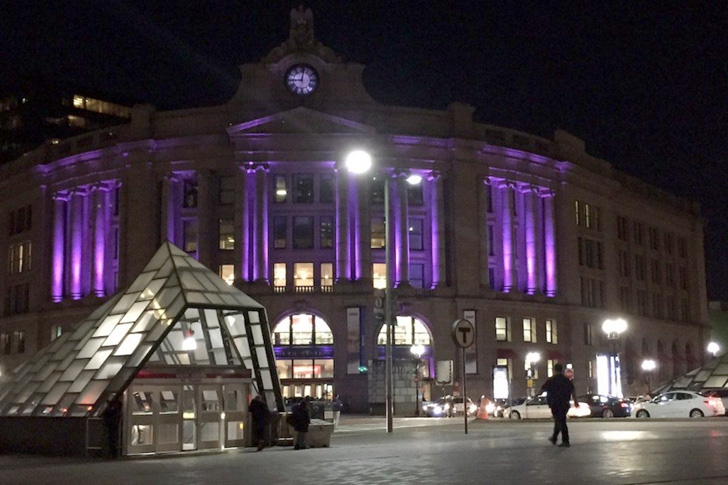 PURPLE coloured tributes are adorning the buildings, newspaper front pages and websites across the globe after news of the singer´s death on April 21.

The life of the singer is being celebrated with purple coloured homages after he was found dead at his home in Minnesota. Friends and fans have felt the shock alike due to the sudden nature of his death. Although he had been suffering with flu like symptoms it was thought the Purple Rain singer was on the road to recovery.

US President Barack Obama said the world had “lost a creative icon.”

Prince’s sold more than 100 million records during his career, and is noted for his innovative music spanning rock, funk and jazz.

Minneapolis, Prince´s hometown, has already turned a couple of its landmarks purple; the Minnesota Twins baseball team turned their stadium purple, as did the Lowry Avenue Bridge in the centre of the city.

Celebrities across the globe have voiced their views on the loss of the legend.

Madonna, who dated Prince briefly, described him as a “visionary who changed the world.”

Chic guitarist Nile Rogers said there were “tears and love on our tour bus.”

President Obama also said: “Few artists have influenced the sound and trajectory of popular music more distinctly, or touched quite so many people with their talent.”

Beach Boys singer Brian Wilson said: “Musically, he could do it all: sing, play and produce.”

Slash of Guns ‘n’ Roses said Prince was “one of the greatest musical talents of my lifetime. Maybe of the 20th century.”

Lionel Richie said: “I can’t believe it, I’m in total shock. So many wonderful memories.”

“He was definitely an original and a one of a kind. Truly there was only one Prince.”

Closer to home, an emotional Mica Paris, who will be performing in Joy´s Bar in Puerto Banus on May 25th, and who famously had a song written for her by Prince, commented on the loss.