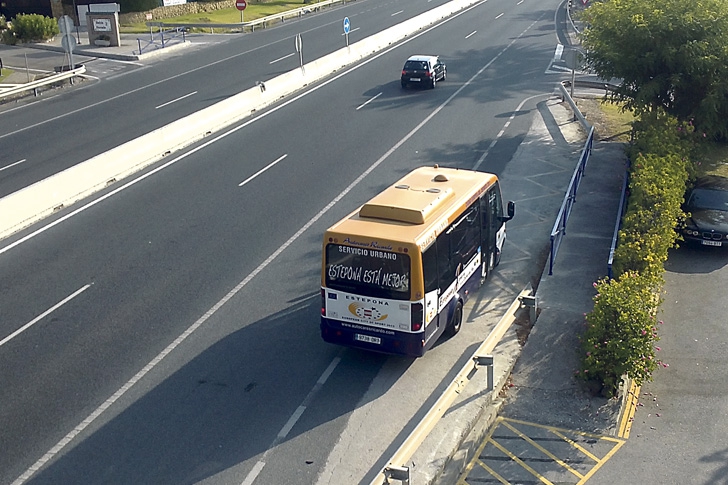 RARE SIGHT: Residents are hoping to get the Estepona August bus service extended to other months.

ONE of our readers has written to the paper to comment on the fact that there is a bus service, provided by the Estepona Council, for the western area of the municipality up to Buenas Noches Urbanisation during the month of August only, and this has apparently been the case for the past 40 years.

During the rest of the year, residents have to either use the Portillo buses which go to Casares or to Algeciras and are fairly infrequent. There is however a service that goes as far as La Glorieta de Guadalobon (by the petrol station), which turns back from there and very often goes back to Estepona pretty much empty.

The reader suggests that as they are only two more roundabouts away, it would appear logical and should not cost a great deal to extend that service for the rest of the year to the Buenas Noches roundabout, and thus give them the bus service that they need.

Many families live in the area most of the year and need to go to Estepona centre to go to the doctors, shopping, or just to visit the town.

To do this, they have to use mostly private transport, or a taxi service which makes life very expensive as many of them are now pensioners. By no means are the majority of those who live in the urbanisation wealthy tourists, or indeed tourists at all.

We contacted the Estepona Council for comment and they kindly said that the service was actually operated by Autocares Ricardo, but has been paid for by the council since it came to power in 2012, and it only ran in August as that was the time of most demand.

In principle however, the residents who want to see the service extended into other months can elect a person to represent them, and supply a signed petition giving the names, addresses and DNI of each person who supports the concept, which can be sent to the council.

They will be happy to consider extending the service, subject of course to financial constraints.