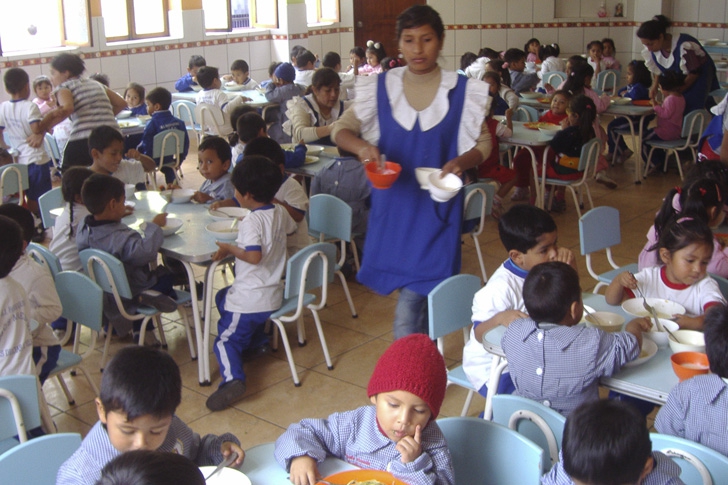 SEVEN years ago, when a group of mainly British expats in Palmanova decided to take action against the extreme poverty which exists in Peru, little was it realised just how much their fundraising and scope of their efforts would grow.

Since that time, some 300 children, attending a school in a shantytown near the Country’s capital, Lima, have been fed twice a day, every day, to combat the malnutrition and related diseases from which they suffer. A paediatric and maternity clinic was also set up, as healthcare in Peru is not free, which makes it very difficult for poor people to obtain the treatment they need. The group have additionally refurbished and equipped the kitchen at the school and also fully equipped a computer room for the children, as well as providing general financial support for the running of the school.

One of the organisers, Chris Barter, explains that it was decided to concentrate their help upon children because it was felt that the future of Peru lay very much in the hands of those who are now children, so it seemed an obvious place to start.

Three years ago, Padre Eugenio, the former curate at San Lorenzo Church, Palmanova, and now a missionary in Peru, found that there was an urgent need for an orphanage to be set up for young teenagers in a very poor village, Quebrada Verde, south of Lima. He approached the group for help and it immediately responded, becoming the orphanage’s main financial supporter. The need is so great for orphanages in Peru, as families completely disintegrate under the pressures of extreme poverty, that the group is now having to double the capacity of this home. This is involving extensive construction works, which are now almost complete, and then the home will need to be re-equipped and furnished.

In addition to these projects, the group also provides support for disabled people from the area.

All this work in Peru is entirely funded by donations and sponsorship from the English speaking community in Mallorca, mainly from the south west of the island.   On Saturday, 21st May, the annual ‘Feed a Child’ coffee morning will be held in the San Lorenzo Hall and patio in Palmanova (next to the Palmanova Palace Hotel) from 10.30am to 1pm to raise additional funds. There will also be handicraft stalls and a raffle at the event and all are most welcome to attend. Entrance will cost only four euros, and for this price, unlimited tea or coffee will be provided, together with a slice of homemade cake.