Fans could be banned for life after bus attack 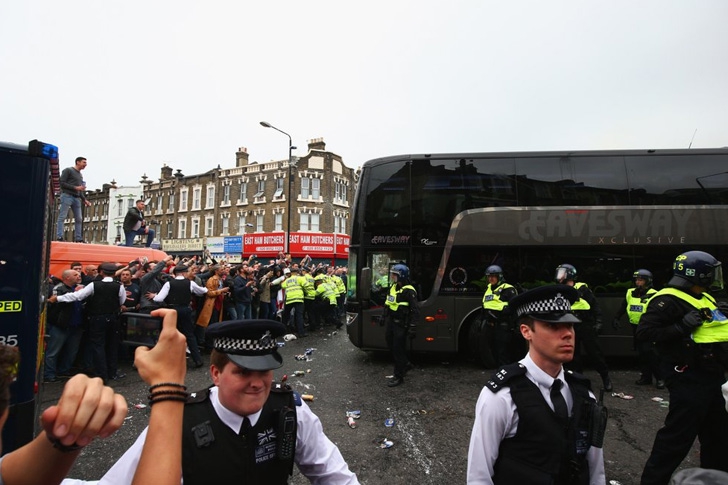 WEST HAM football team have said that any fans found to have been responsible for attacking the Manchester United bus, before the match held last night, on May 10, will face a ban for life.

Bottles and objects were thrown at the coach as it was blocked from moving by supporters just outside West Ham’s Boleyn Ground, Upton Park in East London. This was just before their last ever game in the original stadium before moving to the Olympic stadium.

Police had to board the coach carrying the Manchester United squad after it was an hour late and then became trapped.

The damage was fairly severe with damage to the windows and pieces of the bus fell from the sides.

The Football Association commented that it “strongly condemns the unsavoury incidents,” and added that it will investigate the incident alongside the police and both clubs.

Wayne Rooney, Manchester United captain said the coach “got smashed up” on its way to the football ground.

Rooney continued: “It wasn’t nice… I’m sure you’ll see the images. It’s not for me to say, but it was disappointing of course.

“It’s a big night for West Ham, but I’m sure West Ham as a club will be disappointed with what the fans have done.”

One Manchester United player, Jesse Lingard filmed the scene on the bus, which shows the players taking refuge in the aisle in the centre of the bus as bottles are hurled against the windows.

The Metropolitan Police confirmed that one member of the public along with one officer was hurt during the event.

“We are aware that a number of items were thrown towards Manchester United’s coach this evening, Tuesday, 10 May,” said a Police statement.

“There have been no arrests. An appropriate policing plan is in place.”

Manchester United’s manager, Louis Van Gaal commented: “It is not so nice. The way we have been received is not the proper way, of course.

“That makes all the influence on the players and that is a pity.”

Due to the riotous incident, the match had to be pushed back to 8.30pm following a request from Manchester United’s club secretary.

David Sullivan, West Ham’s co-chairman said he was “gravely disappointed” for the fans who may have had to leave early and miss the special after-match show in the stadium.

“Man United should have got here at 4pm. They know it’s our last game,” he said.

The chaos didn’t stop at the bus as some objects were thrown by fans during the match onto the pitch. West Ham won 3-2. Manchester United’s dream of qualifying for the European Champion’s League is now slipping away following their defeat.