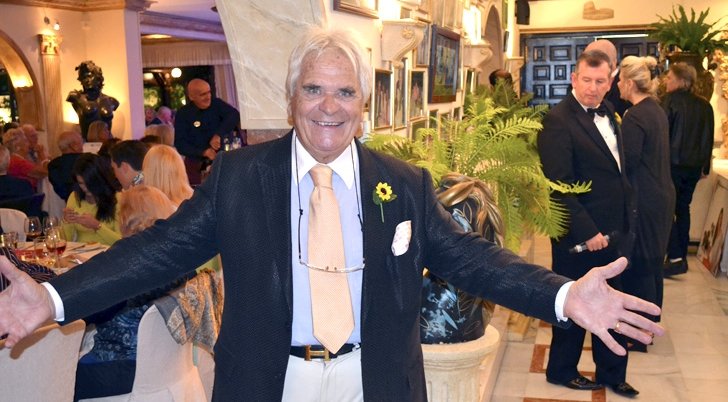 The ever hospitable Sandro Morelli of Villa Tiberio.

MAKE a note in your diary that on Sunday June 12 the spectacular Villa Tiberio in Marbella will host a star-studded event to raise money for Children with Cancer UK, which is affiliated to Great Ormond Street hospital.

The legendary Sandro Morelli, owner of the elegant Marbella venue, has supported the Children with Cancer UK charity for many years, and this will be the ninth year that Villa Tiberio will be the fantastic backdrop for the event.

Italian-born Sandro came to Marbella from London, bringing with him a wealth of experience from working at the Ritz and Cavendish Hotels, so he is undoubtedly a number one choice for knowing how to attract a following.

Villa Tiberio is his life and soul, and the walls of the restaurant are decorated with an array of celebrities who have enjoyed Sandro’s hospitality over the years. Sandro cares about the less fortunate, as he says: “The world has forgotten what is important. How can we spend millions on warheads when there are millions of children dying around the world?”

Children with Cancer UK was founded in 1988 by Diana, Princess of Wales, in memory of Jean and Paul O’Gorman, and this charity has touched the hearts of many further afield than just the UK.

Although the emphasis will be on fundraising for the charity, and apart from a superb meal there will be some first class entertainment from a trio of well-known singers, some of whom are returning to appear at this year’s Ball. The entertainment will be introduced by multi-award-winning Scottish comedienne, playwright, award-winning blogger, best-selling author and former Scotsman newspaper columnist, Janey Godley.

After an absence of four years, Lauren Samuels returns for the fourth time to Villa Tiberio.  Lauren came to prominence as a runner up on the BBC television series ‘Over the Rainbow’ and has gone on to become one of the West End’s leading ladies, starring in shows such as ‘Grease’, ‘We Will Rock You’ and most recently in her award nominated role as Jules in ‘Bend it Like Beckham – the Musical’. She returns to Marbella having just finished the critically acclaimed new musical ‘The Beggars Opera’.

Charlotte Jaconelli shot to fame on ‘Britain’s Got Talent’ as half of Jonathan and Charlotte, the duo that brought the judges and nation to their feet – and proved Simon Cowell wrong. She won a £1 million recording contract, sold over half a million albums, received two gold discs and a solo album deal. Charlotte makes her debut in Spain and is delighted to be supporting Children with Cancer at their Summer Ball.

Rounding of this talented trio of delightful singers is Claire Huckle, who starred in her alter-ego role as an actress in Without Motive, A Respectable Trade and Casualty. She not only has a spectacular showcase of television productions behind her, but she is an excellent performer and highly accredited in her field, so this her second appearance at the Ball promises to be as electrifying as her debut last year.

Adding to the fun of the evening there will be appearances from local personalities including Steve Cline who will conduct the auction, Zoe Hughes, Helena Paul, Frank Valentine, Mel Williams and Rachelle.