Standing side by side with the Priors 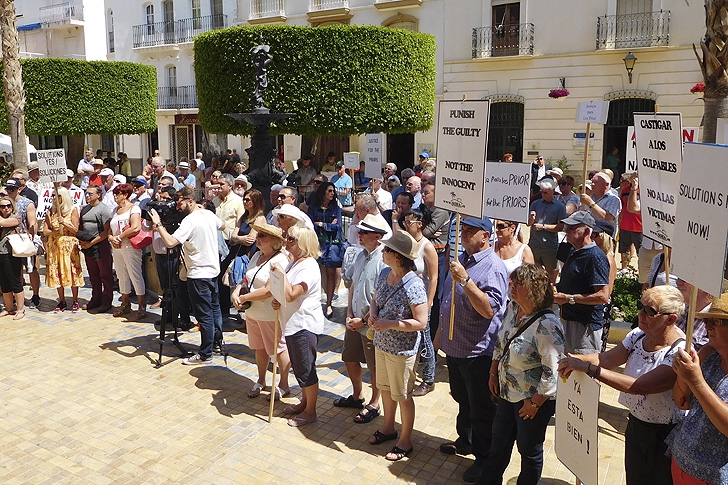 CLOSE to 200 people from all walks of life turned out today (Thursday May 19) to show support for Helen and Len Prior, a British couple whose house was demolished in 2008 after being declared illegal by the Junta de Andalucia regional government.

The peaceful protest, organised by homeowners’ association AUAN took place in the church square in the town of Vera on what was probably the hottest day of the year so far.

AUAN president, Maura Hillen told EWN that she had expected around 100 people to attend. Despite an erroneous story on the front page of free newspaper RTN, which stated the protest had taken place last week, the turnout was better than expected.

The crowd was made up of expatriates of different nationalities, local Spanish residents and mayors and dignitaries from towns across the province.

Standing on the church steps overlooking a sea of banners and placards, Helen Prior bravely spoke to the crowd, describing the couple’s dream of retirement in the sun, which turned into a living nightmare, adding that the situation was horrendous.

Her words were made all the more poignant by the large banners behind her showing photos of the couple’s beautiful villa being bulldozed eight years ago, as they helplessly looked on.

A group of supporters from sister group, SOHA (Save Our Home Axarquia) arrived by coach from the Malaga area to lend their support to the Priors.

SOHA president, Phillip Smalling, told the crowd that many homes in his area had been under threat including his own, and that the Priors’ case was the catalyst for starting up the group.

Christine Ferguson from the village of Macharaviaya, in the Axarquia region of Malaga, travelled with the SOHA group and told EWN: “I have found myself in a similar situation and it is an outrage for decent people everywhere.”

AUAN’s Maura Hillen took to the microphone explaining that getting justice and compensation for the Priors was not a political argument but would also benefit the image and the economy of the region. She called on the authorities to “do the right thing.”

Hillen also pointed out that other property owners had similar issues, referring to a group of houses in Cantoria, also under threat.

Among the speakers was Vera Mayor, Felix Lopez, who had to raise his voice over booing, whistling and jeering from the crowd. He said he personally felt the suffering of the Priors and had many sleepless nights thinking about their plight.

He went on to say that he would help them in their fight for justice.

After almost two hours standing in the hot sun, the crowd and groups of dignitaries dispersed, leaving Helen and Len Prior to go back to the converted garage they now call home and hope that today’s demonstration would go some way in helping them get the justice they have fought so long for.