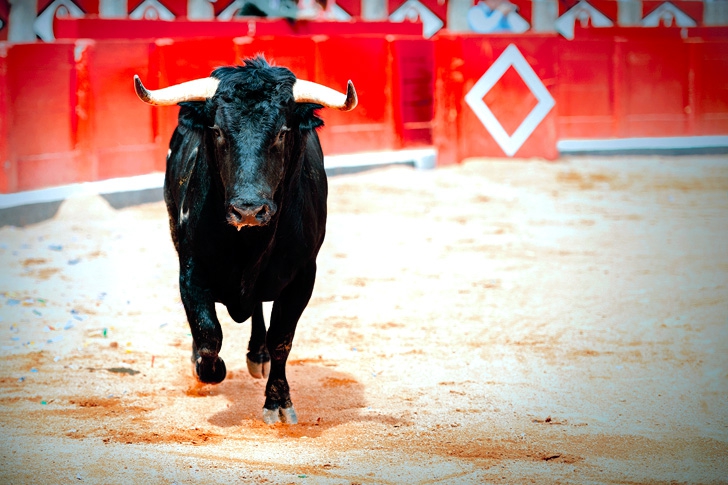 BULL FIGHT: The bull owner used this ruse often; he was a known fraudster.

THERE were toros in those days and well before I arrived. No one knew who built the mini plaza which is still seen today as part of the Hotel Indalo on the beach.

Back then everyone knew death too well. He was as much a part of their lives as the sun and his stealthy presence was to be respected when it showed up. Death was honoured by the wearing of black throughout the year.

Most likely those local corridas were scheduled for the August Patron Saint’s Day in the village. Toros bravos were not caped but novilleros up to the age of two were as the old photos demonstrate. Bravery was often demonstrated by the locals as drunken foolery.

In 1971 a man came into our Gaviota sales office (today an Indian restaurant) selling a package deal: a small bull, flagons of wine and cheap jamon. Wine and jamon was to be sold to the viewing public and fun was to be had by all with a profit for the promoters, who bought the bull.

My brother snapped at the deal, paid a deposit, a day was set, the ring cleaned and word sent out on the village rumour and gossip phone. The place was packed on the event’s day. About an hour before releasing the bull the Guardia Civil showed up and shut down the happening. The man that supplied the bull offered to buy it back for half price.

It was all too slick and convenient for us to believe. Calls were made and it was discovered that the bull owner used this ruse often, and in fact had just done it in Adra, further down the coast. He was a known fraudster.

Details even emerged that often he shared the excess wine and jamon with the Guardia he alerted. His bad luck was having dealt with us as foreigners; he lingered in the Gaviota bar having drinks just two minutes too long.

When my brother finished talking with his lawyers he flew out of the office across the patio and burst through the unopen door to grab the culprit and bounce his head off the wall a few times.

Then he stripped him to his underwear and left him standing, shivering and cowering at the end of the bar with no escape. The game was up and a more than vicious revenge was eminently demonstrated. Mr Bad Guy had miscalculated our foreign reaction.

Worse yet, he was evidently in fear of his life and knew it. He cried as he slid to the floor and tried to cover his face. Swag that he was, he had in his pants our money and further money from other clients ripped off. He paid a high premium for his corruption.

He got one more slap across the face for good riddance and was sent to walk semi-naked to retrieve his car, so he could escape without further physical damage.

He never looked back, but shysters of that type haven’t been heard of since in our area.