Barcelona secure double after extra-time win in the Vicente Calderon 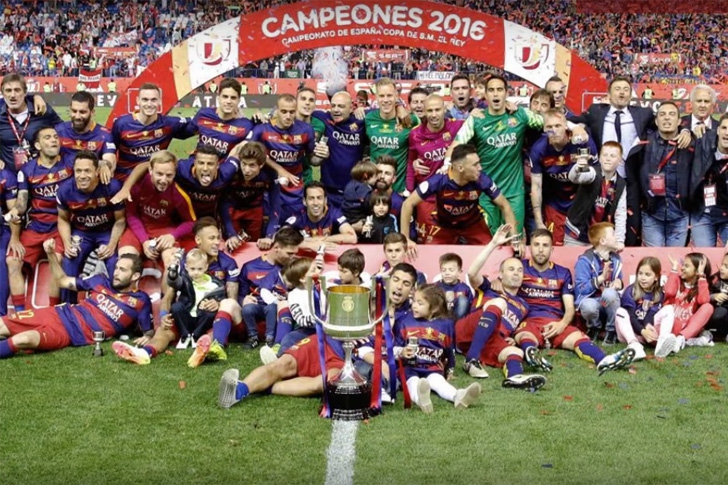 A WEEKEND of cup finals ended in a Copa del Rey win for Barcelona in Madrid, as they eventually saw off stubborn Sevilla 2-0, with both goals coming in extra time.

The Blaugranas had been given a double boost prior to kick off, as a judge overturned the Spanish Government’s decision to ban fans from displaying the pro-Catalan Estelada flag in the stadium, while the club also announced an extension to their kit deal with Nike, with reports suggesting the new contract could be worth as much as €155 million per season.

Europa League winners Sevilla have won their last six cup finals, and gave the La Liga champions plenty to think about here, with the threat compounded when Javier Mascherano hauled down Kevin Gameiro after 35 minutes to book himself an early bath.

It was only the second red card Barca have received since last August, with Mascherano, and referee Carlos Del Cerro Grande culpable for both.

Until that point the game had been close, with Sevilla perhaps slightly happier, but the sending-off forced Barcelona into a reshuffle, with Sergio Busquets moving into defence before Jeremy Mathieu was brought on for Ivan Rakitic at half time.

More bad news arrived at the start of the second half as Luis Suarez twanged a hamstring and was unable to play any further part, breaking down into tears as he approached the bench, with the Copa America just two weeks away.

Sevilla continued to toil, but as the match wore on they became less penetrative, with Barca keeper Marc Andre Ter Stegen rarely troubled, although the Catalan giants were unable to create much themselves as they struggled to break beyond the Andalucians.

Following a niggly period Ever Banega was dismissed in the 92nd minute after hacking down Brazilian scamperer Neymar, leaving both teams facing extra time with 10 men.

The breakthrough came seven minutes into the first period, as Leo Messi played a brilliant, raking 45-yard ball, which bounced once before being poked into the net by marauding left back Jordi Alba.

It was all Barcelona in the second period of extra time, as they created a number of opportunities, before Daniel Carrico’s deserved red card for a wild challenge on Messi reduced the Rojiblancos to nine men.

There was enough time for one more piece of Messi brilliance, as he played the killer pass to Neymar that was gleefully converted to hand Barca a back-to-back double, the first in Spain for more than 60 years.