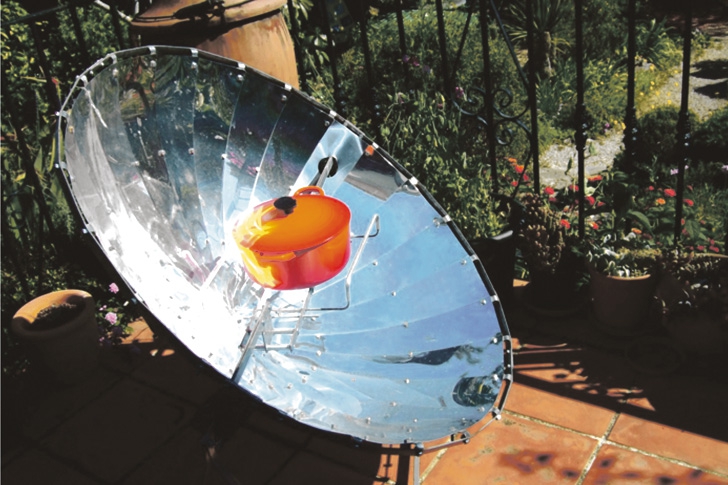 SOLAR COOKER: A tasty alternative to the barbecue for cooking al fresco.

WAY before having our own property in Spain parts of many summers were spent in friends’ properties in La Carihuela and Montemar south of Torremolinos going back to before the Benalmadena port was even started.

Temperatures soared into the upper 40s, but features of old villa gardens that made it bearable still stick in the mind and influenced the development of our own garden.

• Shade is a must. The best is under spreading old trees with a thick canopy of overlapping leaves. The second best is a covered terrace stretching out from the house. Next is a gazebo covered with a thick growth of climbers and lastly some umbrellas and sails.

• If you don’t acclimatise in the early years in Spain by taking siestas in a hammock or on a sun bed in deep shade rather than indoors with the air conditioning set below 25 degrees centigrade one will never enjoy the realities of Spanish summers.

• Plant with drought-resistant plants that put down deep roots which within a few years can be weaned off constant watering. That is why bougainvilleas, lantanas, hibiscus, aeoniums, false acacias, chorisias, palms, cordylines and yuccas were so popular.

The plant lists in our books ‘Your garden in Spain’ and ‘How to use less water in your garden’ include Botanical Spanish and English names and indicate the drought resistance of some 400 plants. By the way, if you want to grow vegetables through the summer give them shade. Even tomatoes don’t need to be in full sun to ripen.

Once the sun becomes low al fresco dinners are a great thing in Spain with rather less flying insects to put up with compared with on a balmy evening in the UK. Like most we started by barbecuing but became bored with the smoky taste and found more pleasure in cooking in tagines purchased from Marrakesh, a Mexican oven, a paella pan and gas ring, and the best of all slow cooking with a solar cooker.

Kits for various sizes are available from www.alsol.es. Thinking about summer insects do spray if you have to with ecological products, now widely available and safer for people, pets and nature than most chemical sprays and powders.

We remain amazed at the number of chemical insecticides and fungicides in garden centres and many agricultural cooperatives, when most problems can be solved by not co-planting drought resistant and thirsty plants, not overwatering and feeding, using neem oil, garlic or ecological soap sprays as insecticides and natural sulphur powder, not copper sulphate, and propolis as fungicides.