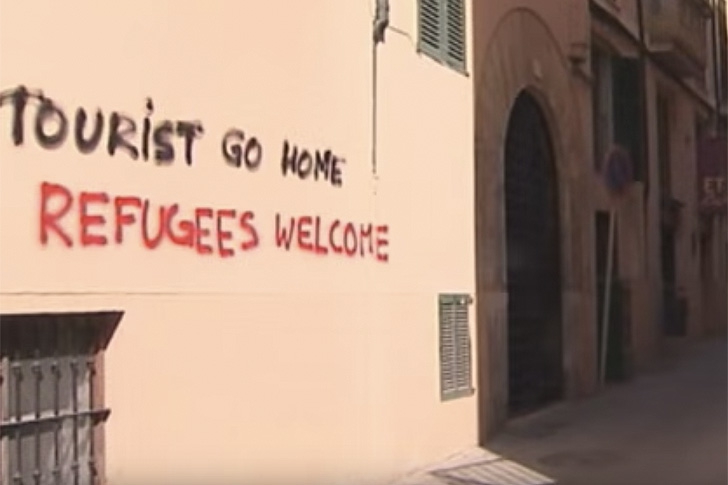 THE people of Mallorca face a stark choice concerning the island’s future, as local protests against an increasingly untenable tourist presence grow in strength ahead of a long, hot, and very busy summer.

With more than a third of employment reliant on the industry, it is far from the case that a widespread siege mentality has developed, pitting the majority of residents against the pale skinned hordes.

Undoubtedly the work of a small minority, and roundly condemned by local businesses, the graffiti has, however, drawn public attention to the practical sustainability of welcoming millions of foreigners to a small island famed for its natural beauty.

Now environmental organisations and residential representatives are coming out in favour of restricting, or significantly reforming the industry, as a means of securing Mallorca’s long term future.

Association head from the La Seu neighbourhood of Palma, Luis Clar, made a striking comparison, arguing “They want to turn us into a theme park, a place you close the doors on at night because no-one lives there”, while local worker Gaspar Alomar noted “If we build our whole economy around tourism we’ll have nothing to hold onto if trends change, in the long run it’s not sustainable.”

Paradoxically many of the measures taken by local authorities to mitigate the impact of tourism on local conditions have alienated citizens, with the restriction of parking spaces a prime example.

Tourism minister for the Balearic government, Biel Barcelo, has supported the introduction of a tourist tax to be implemented this summer as raising the necessary funds to properly manage the situation and protect the environment.

“We want to keep living off tourism and we need to make it sustainable for the next 30 or 40 years” he said in response to indignation from the lucrative hotel industry which opposed the move.

With Mallorca set to benefit from increased travel to Spain in the wake of terrorist atrocities in Tunisia and Turkey, the tourist, or ‘eco’, tax is unlikely to have any impact on the record numbers expected.

The question is whether an extra €50 million is sufficient to meet the legitimate concerns of local residents and also protect the ecological integrity of the island.

Until a viable long term alternative to relying on tourism to such a crippling extent is put forward, the islanders will have to find a way to cope with the situation and the inevitable tensions that will likely spill over this summer, violently on occasion.