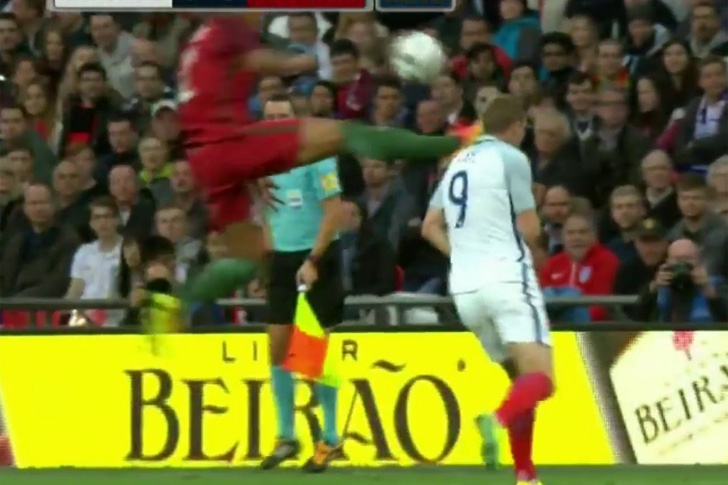 A TOUCH HIGH: Bruno Alves was sent off for this ‘tackle’ on Harry Kane, although to his credit the England player barely flinched.

A LATE header from Manchester United defender Chris Smalling glossed over a less-than-convincing victory against a Portugal side missing their talisman Cristiano Ronaldo, as England rounded off their pre-Euro 2016 preparations at Wembley.

Smalling swooped in the 86th minute to head the winner from substitute Raheem Sterling’s cross, after England had spent much of the match labouring to break down 10-man Portugal, who had Bruno Alves sent off for a ludicrously high challenge on Harry Kane in the first half.

Questions will be raised as to why Roy Hodgson has waited until so late in the day to experiment with Wayne Rooney, Harry Kane and Jamie Vardy in the same side, with the presence of the England captain in the centre of the park pushing the two centre forwards into wide positions, with Vardy in particular having only nine touches, one of which was the kick off, before being substituted after 66 minutes.

The muddled feeling was compounded by the sight of the Premier League’s top scorer Kane taking corners, with as many as five outfield players deployed out of position for long periods, and the team failed to create a noteworthy chance before Smalling’s last ditch effort.

Rooney was nominally playing at the tip of a midfield diamond, but his willingness to get forward effectively split the front two, while Tottenham’s Dele Alli, who looked so outstanding in a central attacking role during recent 3-2 defeat of Germany, also suffered as he was shunted out to the left of the midfield two.

Kyle Walker at right back was arguably the night’s best performer, and Hodgson was left with more questions than answers ahead of England’s tournament opener against Russia in Marseille a week on Saturday.

The Three Lion’s coach appeared tetchy in the post-match press conference, insisting that “We looked good,” although no one who had watched the game was fooled.

Former England striker Alan Shearer took to social media to express his disapproval, posting: “If you’re going to play Harry Kane and Jamie Vardy then at least play them as centre-forwards and not wingers. Or what’s the point?”

Gary Lineker appeared to agree with his colleague, arguing that width “should be provided by full-backs, not the two strikers.”

England depart for their base in Chantilly on Monday June 6 on the back of three consecutive friendly victories, but it is disconcerting that Hodgson is still seeking the right formation so close to the tournament, and they will have to perform better than this in France.