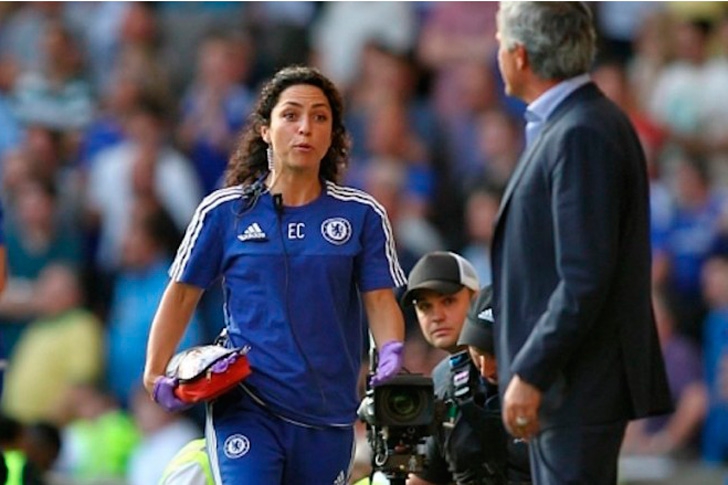 Carneiro and Mourinho during the fateful incident in August 2015.

THE Gibraltar-born sports medicine specialist and former Chelsea team doctor Eva Carneiro has reached a settlement with the club over her constructive dismissal claim.

She has also agreed to drop claims of sexual discrimination and harassment against former Blues manager Jose Mourinho within the terms of the confidential agreement signed on Tuesday, June 7.

For their part, Chelsea have apologised “unreservedly” to Carneiro as the tribunal, which was expected to continue for seven to 10 days, was cut short following a personal visit to Croydon by Mourinho just before she was about to give evidence.

Both Chelsea and Mourinho will be relieved at the deal, which was apparently struck in a corridor of the courthouse, since the case could have led to the publication of damaging witness statement, text messages and emails.

A Chelsea statement issued immediately after the accord was struck said that the club “regretted the circumstances” surrounding Carneiro’s dismissal and added that Mourinho thanked her for the “’excellent and dedicated support” she provided while employed by the club, and wished her a “successful career.”

The new Manchester United manager had not been expected in court until next week, where he was due to face a two-day grilling, but the agreement means this will not be necessary.

On Monday June 6, the first day of the hearing, the employment tribunal heard that Mourinho criticised Carneiro and physiotherapist Jon Fearn for running onto the pitch to treat an injured player during a fixture against Swansea at Stamford Bridge in August 2015.

This meant that Chelsea were temporarily down to nine men having had a player sent off, outraging the Portugese manager, who subsequently had her demoted from first-team duties and called her actions “impulsive and naive.”

Carneiro’s lawyer said that she heard Mourinho call her something obscene in Portugese during the game, but he denies that the remark was directed at her.

She later left the club, leading her to open legal proceedings against both club and manager in October 2015.

Although the size of the pay-off agreed will not be revealed, it emerged on Monday that she had already turned down an offer of €1.5 million and her old job back following Mourinho’s sacking in December 2015.

In her statement Dr Carneiro said: “I am relieved that today we have been able to conclude this tribunal case. It has been an extremely difficult and distressing time for me and my family and I now look forward to moving on with my life.”

Carneiro spent time working at the Specialist Medical Clinic in Gibraltar at the end of March, and the centre posted a message expressing their delight at the settlement on their Facebook page: “A big congratulations from us all. Eva Carneiro has been vindicated! Chelsea state that everything Eva did on that match day was according to the rules and within her duties as the club doctor.”