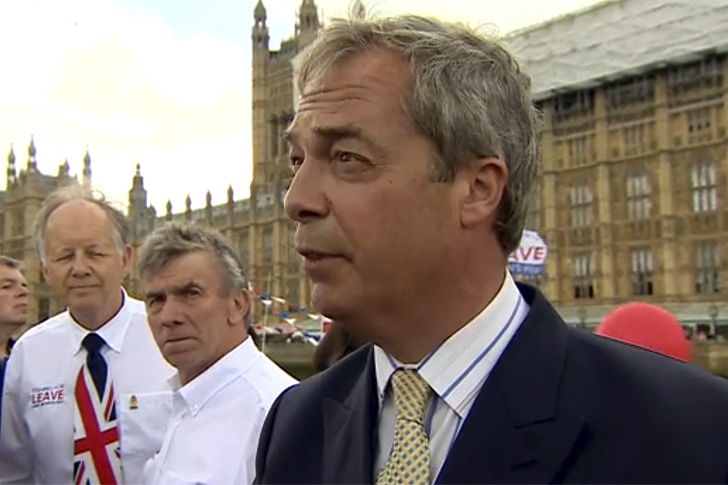 JUST as it appeared that things couldn’t get more surreal with the referendum, opposing fleets met on the River Thames outside the Houses of Parliament on June 15. The pro-Brexit factor, made up of a number of fishing vessels from the South Coast, were transporting Nigel Farage and for some reason Joey Essex.

The opposition was led by Sir Bob Geldof in slightly less-impressive vessels, but amused many by playing the 1964 song ‘The In Crowd,’ originally performed by Dobie Grey, over loudspeakers.

The two leaders exchanged ‘pleasantries’ in the middle of the Thames, with Sir Bob branding Mr Farage a “fraud” and “no fisherman’s friend” whilst Mr Farage accused him of “mocking” impoverished fishermen.

Reportedly, there was a little sabre-rattling and some exchange of hose fire, but a metropolitan police launch was reportedly on hand to keep matters under control.

The other big Brexit news of the day was that the Leave campaigners have explained what they will do once Britain leaves the European Union in order for Britain to take back control of its future destiny, and that Parliament would be free to restrict entry into the country and to reduce the power of EU courts.

The Remain factor, using George Osborne as its main representative, has warned of a ‘black hole’ in the country’s finances which would require additional income tax revenue as well as an increase in petrol and alcohol taxes, but 57 Conservative MPs have indicated that they would rebel and block such increases.

Boris Johnson, eighth cousin of David Cameron, both of whom are related to the Royal Family through George II is poised to take over as Conservative leader and therefore possibly Prime Minister in the event that Britain does vote to leave.

Such a putsch is being forecast by Scotland’s First Minister Nicola Sturgeon, who is warning that the UK voting to leave the European Union could present the risk of a “right-wing Tory takeover” and the unspoken threat is that in such a scenario, Scotland would demand another independence referendum which could lead to the break-up of the United Kingdom.