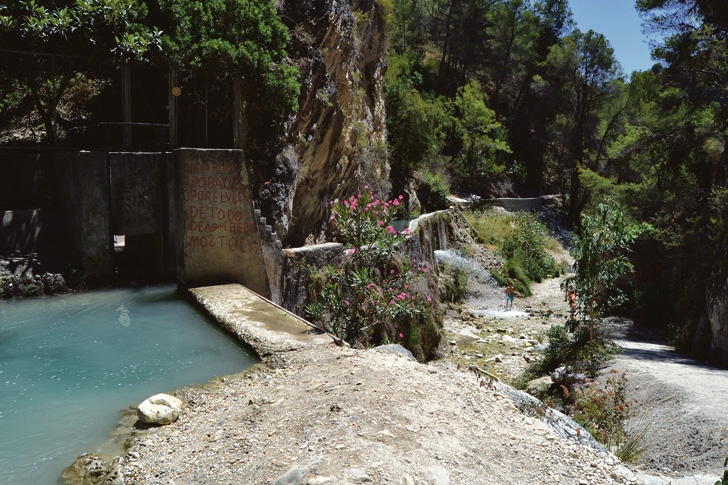 The arrival of the heat and the first rescue operation on Saturday (June 11), when a hiker broke his knee by Nerja’s Rio Chillar, has sparked concern over the dangers of the area’s sudden popularity.

Over the last 10 years or so the beautiful area beside the river has come to the attention of so-called ‘domingueros’ who flock to the site, part of the Sierras Tejeda, Almijara y Alhama natural park.

Holidaymakers and residents from all over the Axarquia and Costa del Sol are attracted to Rio Chillar, which usually carries water even during drought, however a complete lack of control of the numbers of people allowed in at once, vandalism and a general lack of care for the environment are causing serious problems.

Although Nerja Council has suggested to the Junta de Andalucia regional government that visits are somehow limited, as is the case in other parts of the park, the Junta claims this is not feasible.

Environmental Councillor Jorge Bravo said: “we’re very worried by these crowds, which turn up and head off up the river loaded down with all sorts of stuff as if they were going for a day on the beach. “The Rio Chillar is not a beach, it’s a very delicate environment which deserves respect, not rubbish, graffiti and parked cars,” the councillor complained.

Although unable to restrict numbers, the Junta is drawing up a self-protection plan for the area. The council has sent its suggestions and hopes the plan will be ready soon and will at least provide guidelines for emergencies, which are becoming more and more common. “It will outline security areas, emergency accesses and protocols for emergencies,” said Bravo, who reminded the public that parking on the access lanes is strictly forbidden.

This year a parking area at the old quarry will also remain closed, meaning visitors will have no choice but to park in the area by Calle Mirto before reaching the river. The council also intends to install large signs warning of the risks and stressing basic regulations to be followed. Once the summer is over, the council has announced, it will no doubt as in previous years have to organise a volunteer clean-up of the area, as there are bound to be people who fail to clear up after themselves.