Universal grief at the murder of MP Jo Cox 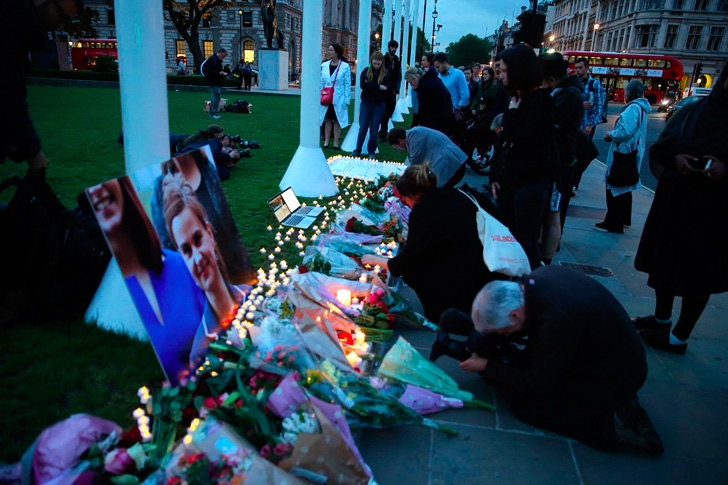 AS TRIBUTES poured in from round the world following the brutal killing of Labour MP Jo Cox yesterday (June 16), formal campaigning for the referendum vote was put on hold and the Union Flag was flown at half-mast above the Houses of Parliament.

Her bereaved husband Brendan told the Yorkshire Evening Post “Jo would have wanted two things above all else to happen now, one, that our precious children are bathed in love and two, that we all united to fight against the hatred that killed her. Hate doesn’t have a creed, race or religion, it is poisonous.”

Hillary Clinton made a statement that said amongst other things “It is cruel and terrible that her life was cut short by a violent act of political intolerance. It is critical that the United States and Britain, two of the world’s oldest and greatest democracies, stand together against hatred and violence. This is how we must honour Jo Cox.”

As a gesture of respect for the murdered MP, David Cameron, in Gibraltar, cancelled a rally to promote the Remain argument whilst the Government of Gibraltar issued a statement saying, “It is with deep sadness that HM Government of Gibraltar has received news of the death of Jo Cox MP. Our thoughts and sympathies are with her family at this terrible time.

This is a truly appalling attack on a serving MP working hard to serve her community. Jo Cox was a universally respected Member of Parliament who fulfilled her democratic duty to the very best of her abilities. This horrific act is an attack on democracy and the British freedoms that Jo Cox worked so diligently and passionately to defend.

HM Government of Gibraltar strongly believes that the right decision to cancel any campaigning has been made by both sides. Although the public’s disappointment at the cancellation of the Prime Minister’s scheduled appearance at Casemates is understandable, the Government believes that the Stronger In campaign made the correct decision as a sign of respect for Mrs Cox and her family.”

Spanish politicians including Mariano Rajoy who had criticised the visit of David Cameron to Gibraltar also tweeted their sympathies to the MPs family, condemning her untimely murder.