Poisonous Lionfish on the loose in the Mediterranean 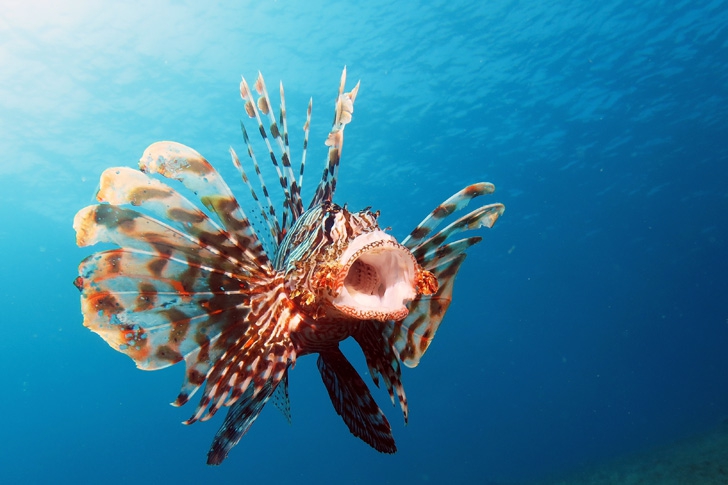 FLOAT LIKE A TIGER: The Lionfish has venomous fin spines, and a sting can easily put an adult in hospital.

VENOMOUS Lionfish may be spreading through the Mediterranean, according to a new report from the International Union for the Conservation of Nature (IUCN).

IUCN spokesperson Maria del Mar Otero said that the fish has been spotted around Turkey and Cyprus in the Eastern Mediterranean, having previously been seen in Israel and the Lebanon, and added: “That shows that the fish is spreading, and that’s a cause for concern.”

The Lionfish, Pterois volitans, also known as turkey fish, dragon fish and scorpion fish, is native to coral reefs of the Indo-Pacific region, but is extremely invasive, becoming an ecological nuisance in the Caribbean Sea and along the Eastern Coast of the United States in recent years.

Entirely piscivorous, the cantankerous-looking beast’s voracious appetite and lack of natural predators are the main issues, since they fill the niche of native fishes and decimate the populations of smaller species, affecting the delicate balance of ecosystems.

Lionfish are notorious for their curious appearance and venomous fin spines, thus they can be seen in the majority of public aquaria, although in reality the poison glands at the base of the hollow spines are only activated when the fish is threatened, and are not used for hunting.

This is not to say it isn’t dangerous, however, with a sting typically causing systemic effects including extreme pain, nausea, vomiting, fever, breathing difficulties, convulsions, dizziness, redness on the affected area, headache, numbness, paresthesia (pins and needles), heartburn, diarrhea, and sweating.

More rarely, a sting may cause paralysis of the limbs, heart failure, and even death, particularly in young children, the elderly, those with a weak immune system, or the unlucky few with an allergy to the venom.

They are not aggressive to swimmers, preferring flight rather than fight, with most mishaps occurring on fishing boats.

The fish are likely to have arrived to the Med via the Suez Canal, long demonstrated to be a corridor for invasive aquatic species, as there is a large population inhabiting the Red Sea.