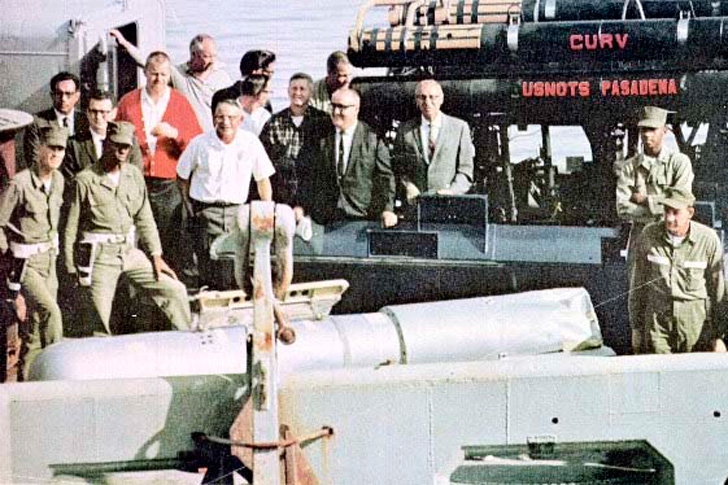 The recovered hydrogen bomb displayed on the USS Petrel

MORE than 50 years after the Palomares nuclear accident, one of the biggest in history, the New York Times has published an article which suggests that the authorities hid the truth and many involved are now suffering the after effects.

On January 17, 1966, 1,600 low-ranking troops were ferried to the area from US Air Force bases across Spain to help clear up as quickly and quietly as possible after a B-52 and a refuelling jet crashed over the coast, dropping four hydrogen bombs on Palomares. Although there was no nuclear explosion, plutonium leaked out causing what would today be referred to as ‘dirty bombs’ which would result in immediate evacuation.

However at the time everything possible was done to hush up the dangers and the Air Force is still trying to sweep it all under the carpet, the NYT claims. The newspaper has interviewed many of those sent to Palomares and claims they were given hardly any protection and were always told they were safe.

In a secret briefing afterwards, chief scientific adviser Dr Wright H Langham told Atomic Energy colleagues regarding paper surgical masks provided: “It wouldn’t do you any good in the way of protection, but if it made you feel better we let you wear it.”

One of those at the site, military police officer Mr Slone, said he was given a plastic bag and told to pick up the radioactive fragments with his bare hands. “A couple of times they checked me with a Geiger counter and it went clear off the scale, but they never took my name or followed up with me,” he said. To appease the locals, airmen were sent to local houses with hand-held radiation detectors. However they were not taught how to use the devices, in fact they were told to leave them turned off.

Peter M Ricard, one of these men, said: “We were just supposed to feign our readings so we didn’t cause turmoil with the natives. I often think about that now. I wasn’t too smart back then. They say do it and you just say, ‘Yes, sir.’”

Now, as many fight diseases believed to be caused by plutonium poisoning (of 40 tracked down by the NYT, 21 were battling cancer and nine had died), they continue to fight for free health care which they should have by rights due to the incident. Yet, as the Air Force refused to repeat any tests and insists that there was no risk, this is denied again and again.

Meanwhile in Palomares, extensive areas of contaminated land remain fenced off as Spain waits for the US to remove and dispose of the affected soil as promised.