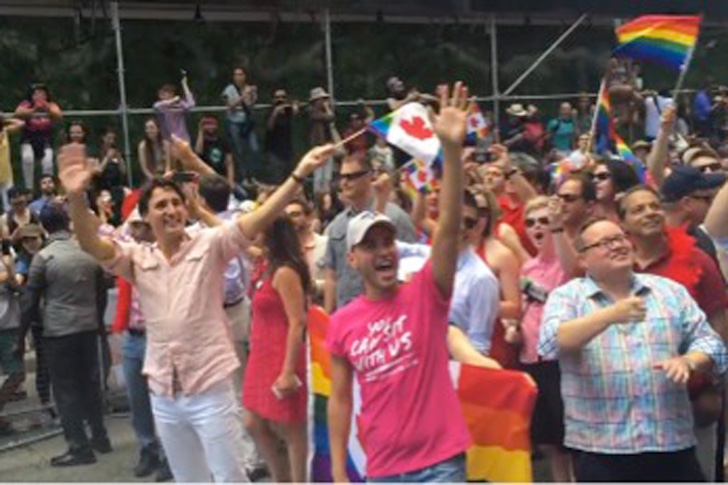 AS the gay pride celebrations sweeping across the world hit Canada, Justin Trudeau became the country’s first prime minister to take part in a parade as he told media his government was considering implementing gender-neutral ID cards.

Paraphrasing Martin Luther King Jr he described recent moves by the Canadian legislature designed to bolster the queer and gender fluid communities as “part of the great arc of history sweeping towards justice.”

Rather than a simple choice between M and F, the development would see X being presented as an option for those who do not identify with being exclusively either male or female.

Already an option on Ontario driving licenses, the X gender is also permitted in Australia, New Zealand and Nepal.

Trudeau’s announcement comes as the concept of gender neutrality gains ground across the (predominantly) western world.

Last month the Canadian parliament voted to change the lyrics of the national anthem O Canada, introducing a bill that would see the line “in all thy sons command” to “in all of us command”, while Trudeau has made a point of having gender parity in his cabinet with 15 men and 15 women.

In Sweden, Toys R Us have transformed their largest warehouse into an eclectic mixture of toys not designated as either boys or girls, but rather for everyone, as progressive parents throughout the country demand that children not be boxed into social stereotypes.

The Nordic country has pioneered the concept, with gender-neutral schools declining to differentiate between boys and girls since a transformative 1998 education act sought to shake up schooling.

Today there are around 80 schools in the UK which have loosened uniform rules so as to allow pupils to select whichever part of the attire they feel comfortable with, while removing specific references to gender in dress codes and regulations.

There is even a growing movement to change language itself to shed ‘binary pronouns’ ‘he’ and ‘she’ and replace them with a gender neutral pronoun, with transgender organisations hoping to see a universal word emerge which could cross language barriers.

The idea of gender being a social construct rather than a biological truth has slipped into mainstream politics from its emergence in 20th century feminist and identity theory and consideration in many religious and philosophical strands.

It suggests that while biological sex may be fixed to some extent, gender is simply a reference to the prevailing social and cultural norms which may define an individual’s place in the world.