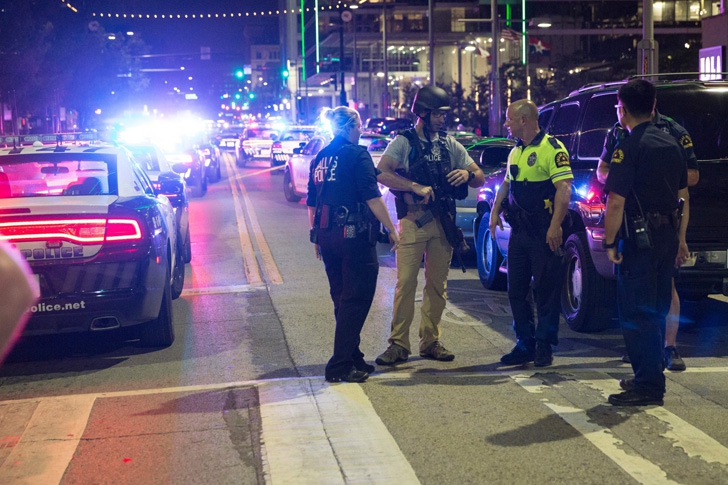 DALLAS police are engaged in an armed stand-off with a suspect who has killed five officers, shot six more and claims to have placed bombs around the Texan city.

On Thursday evening hundreds of people gathered for a peaceful anti-violence protest, one of many which have swept the nation in the wake of the suspicious police killings of two black men, Alton Sterling in Baton Rouge, and Philando Castile in Minneapolis.

Reports remain sketchy with it being believed that two snipers opened fire on police officers, shooting 11 and injuring one protestor, Shetamia Taylor, who dived across her children to protect them.

Police had initially released a photo of Mark Hughes, whose brother had helped organise the protest, naming him as a suspect. Hughes, who was carrying a rifle and donning military-style camouflage in the photo, turned himself into police after hearing that he was wanted and has since been cleared.

Latest updates have at least one shooter hiding in a second-floor car park near El Centro College, and Homeland Security officers are on the ground.

Witnesses have described chaotic scenes with rapid bouts of gunfire, heard across the city’s downtown area, sending the crowd running for cover.

Police are thought to have arrested several suspects and believe that four coordinated the attack, including the one currently at large.

“The suspect we are negotiating with … has told our negotiators that the end is coming and he’s going to hurt and kill more of us … and that there are bombs all over the place, here and downtown,” said Dallas police chief David Brown .

“We are being very careful in our tactics so that we don’t injure or put anyone in harm’s way. We still don’t have a complete comfort level that we have all the suspects. So we will continue a very, very rigorous investigation and search of downtown … until we are satisfied that all suspects have been captured.”

Expressions of outrage and sympathy have been led by Dallas mayor Mike Rawling who said: