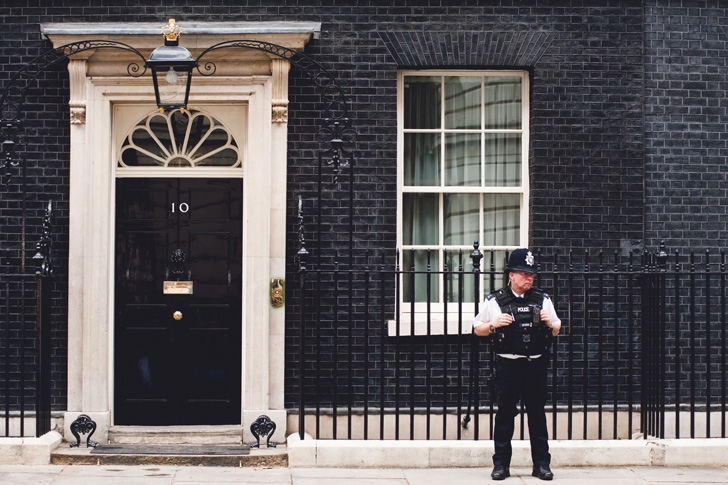 NUMBER 10: At least Larry hasn’t run away yet.

WHAT a day: Monday July 11. As one politician stepped down (Brexiteer Andrea Leadsom), another stepped up (Labour’s Angela Eagle), and another (David Cameron) stepped back, handing over Number 10’s keys to Theresa May. A day of ‘Mayhem,’ you might say?

So, Theresa May, a Remainer who kept her head down in order not to become too tarnished by association with the ludicrous Project Fear ended up on top. Doubtless she will have to spend quite a while having the splinters removed from all that fence sitting she did over the EU.

As to whether she’ll be a ‘healing’ Mother Theresa figure, we’ll just have to wait and see. She has talked about more inclusion and bringing the country together (though, thankfully, no Thatcherite quote from St Francis of Assisi from this – like Angela Merkel – clergyman’s daughter).

As for the Margaret Thatcher Mk2 label (or the UK’s Merkel), with the current threat of jobs moving abroad because of uncertainty, consumer confidence at a 21-year low, high street sales plummeting and awareness that any trade deals must wait until after the UK’s formal Brexit, she’s clearly got a challenging in-tray.

And not least the fear among Leavers (the 17.4 million who voted unequivocally to Leave) of dragging out Brexit or watering it down in any way, not to mention that the resulting internecine warfare in the Tory party would make the current Labour, err, mayhem look like a teddy bears’ picnic.

Finally, a piece of good news – and resounding win for ‘Remain’ – is that Larry, the No.10 cat, hasn’t done a runner like so many others around him. Following in the paw prints of several Downing Street moggies, his role as Chief Mouser to the Cabinet Office is “to keep Whitehall pests at bay.” (Let’s hope he stays up to, umm, scratch to keep at bay any potential disillusioned, disaffected Leavers)

Reportedly, Larry’s being kept in so he can’t escape and grab a seat on the EU gravy train. Collared, in other words, so he can’t flea?