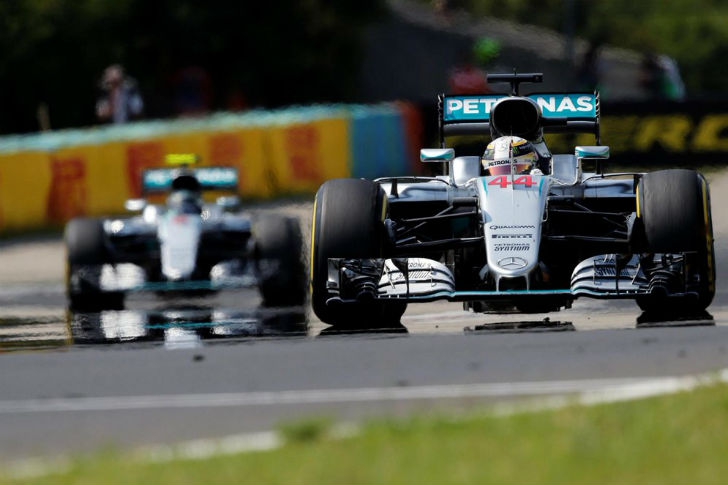 WINNER: Hamilton was commanding in a relatively incident-free race.

LEWIS HAMILTON is the new leader of the Formula 1 championship standings, as he clinched a record-breaking fifth win in the Hungarian Grand Prix at the Hungaroring.

He now holds a six-point advantage over German team mate Nico Rosberg, who finished second here, to complete a remarkable turnaround in this year’s competition, as he trailed by 43 points after his rival won the opening four races.

In round five, the pushy pair forced each other off the track in Spain, but since then Hamilton has literally and figuratively put his foot down, winning five of the last six Grands prix to put himself in a commanding position with 10 races remaining.

This was a largely fuss-free victory from the world champion, as he finally put in a good start, taking the lead into the first corner despite starting second on the grid, and after that the only real moment of concern was when his team warned him to up the pace as Red Bull’s Daniel Ricciardo closed to within three seconds of the two Mercedes after 30 laps.

Hamilton responded on the following lap, increasing his pace by a full second, and although he was held up by Haas’ Esteban Gutierrez on lap 52, for which the Mexican driver duly received a flick of his opposite number’s middle finger, he always had a little extra in the tank to repeatedly pull away from Rosberg.

Ricciardo eventually finished third for his first podium finish since Monaco in May, with Ferrari’s Sebastian Vettel in fourth and the other Red Bull of Max Verstappen in fifth, while Kimi Raikkonen produced a superb drive to finish sixth, having started in 14th on the grid.

Raikkonen was apoplectic after the race, however, accusing Verstappen of overly defensive driving which contravened the rules, as the Belgian-Dutch driver twice moved across the track to block the feisty Finn, who at one point damaged his front wing after clipping the back of his opponent’s car.

After the race, Hamilton angered Rosberg as he discussed the controversial events which allowed the German to take pole position, when stewards allowed his time to stand despite double yellow flags being waved.

“The stewards need to come up with some kind of solution because the whole 23 years of my racing, it has been ‘if it’s yellow flag, you slow down’ and if it’s double yellow flag, you be prepared to stop and Nico was doing the same speed at the apex as I was doing on the previous timed lap,” said Hamilton, with Rosberg visibly riled as he sat alongside.

Hamilton continued to slap Rosberg in the face as he continued, leading his affronted colleague to butt in, as he sarcastically responded “Thank you for making that statement,” slapping the Brit on the shoulder.

Vettel and Ricciardo were among the other drivers who agreed with Hamilton, but in the end it mattered little as the F1 roadshow moves on to next week’s German Grand Prix with the three-time champion appearing utterly dominant at present.