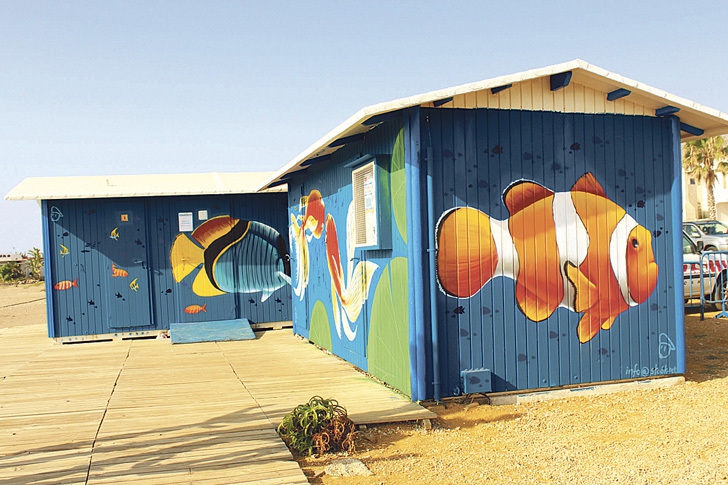 MOJACAR’S beach cabins became works of art once again last week as they were decorated with murals depicting sea-life.

Artist, Nico Rodriguez was first commissioned three years ago by Mojacar Council, to brighten-up the service cabins located on the beachfront.

The cabins house public washrooms and are used as bases for the lifeguards and Civil Protection at various points along the playa.

The first cabins to be decorated were those located at Playa del Cantal and Piedra Villazar. This year, Rodriguez transformed the cabins at Marina de la Torre and Las Ventanicas.

Rodriguez used the sea as his muse: the first two cabins featured larger than life sea turtles, stingrays and a majestic hammerhead shark.

The latest paintings include well known fishy characters from the popular movie ‘Finding Nemo,’ along with easily recognizable creatures of the deep such as jellyfish and octopus.

Young onlookers were delighted to see the paintings of the brightly coloured creatures taking shape. Eight-year-old Miguel Ortis, from Salamanca, holidays in Mojacar every year and said he loved the paintings on the cabins and that Nemo was his favourite.

The idea behind the project is to create art that people can enjoy and it is hoped that people will respect the paintings.

Shortly after the first paintings were completed in 2013, residents were shocked to see the works of art had been daubed in graffiti.

Rodriguez didn’t hesitate to return to Mojacar to repair the damage. He said he believed the ‘tags’ were a revenge act from another street artist.

The 39-year-old urban-artist lives in Almeria and studied art in Granada.

He told EWN: “I was delighted to be invited back to Mojacar by the council, to work on the remaining cabins.”

Rodriguez has done similar work in other areas and said that he appreciates the work of the UK’s elusive street-artist ‘Bansky.’

His work is not restricted to larger pieces. His exhibition of depictions of a flamenco troupe is currently on tour and he hopes he can bring the display to Mojacar.

To see more of the artist’s work visit www.stook.net.