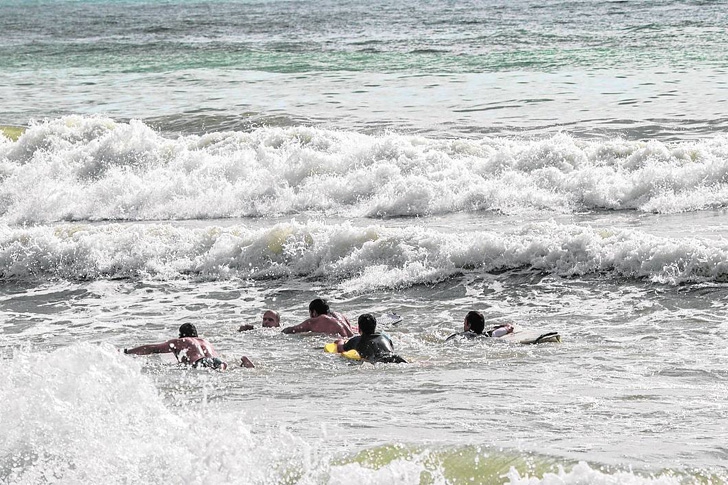 IN VAIN: The dramatic moment when the surfers attempted to save a stricken man’s life.

STRONG currents and large waves were prevalent along the majority of the Costa del Sol over the weekend, as red flags were hoisted and lifeguards could be seen patrolling the area’s beaches on foot, using their whistles and wild arm movements to warn foolhardy tourists, many of whom had decided to brave the conditions, to get out of the water.

Sadly, droves were undeterred and plunged back into the raging sea as soon as there was no-one around to tell them otherwise, with events coming to a head on Sunday, August 7, as one person lost his life and another was rescued following a dramatic series of events in Torremolinos.

At around 10.30am, half-an-hour before the lifeguards were due to begin their shift, a number of beachgoers began to cry for help as they spotted a lifeless body in the water, several 10’s of metres away from the shore.

In the absence of official assistance, a courageous group of surfers elected to try and help the stricken figure, battling against the grim conditions to reach him, but by the time they managed to get him to shore he had no pulse, having spent much of the operation coughing up water.

Two members of the public and a nurse who was on the beach administered CPR, continuing for around 10 minutes, until an ambulance appeared, but paramedics were unable to save him despite administering two shots of adrenalin, declaring the 41-year-old dead 20 minutes later.

A second incident resulted in an irresponsible swimmer being pulled in by two lifeguards and a group of more than 25 tourists, who formed a human chain to avoid anyone being overpowered by the treacherous waves, and an additional 18 rescues were carried out over the course of the day, with eight people admitted to hospital.

A total of 10 people have now drowned on the Costa del Sol since the beginning of the summer, with the majority of such incidents having occurred on days when red flags have been flown.

The red flag signifies that no one should enter the water under any circumstances, and despite being well equipped, there is little that the emergency services can do when a significant proportion of beachgoers, many of them children, appear to think that they know best.