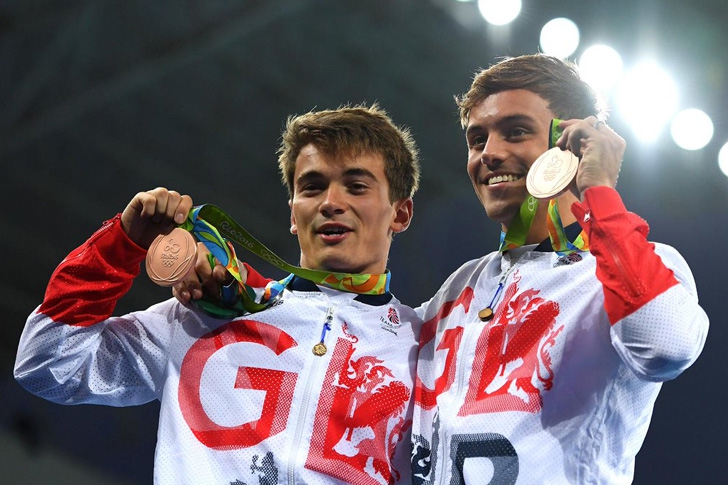 TEAM GB’S Tom Daley and Dan Goodfellow picked up a bronze medal in the men’s synchronised 10m platform dive event at Rio 2016, after pipping Germany for third with a superb final dive in a tense finish.

The pair only began training together last October, but were tipped for a medal after collecting the silver in the European championships in May, with Daley finally winning a medal in this even after finishing fourth in London and last in Beijing, where the then 14-year-old had a well-publicised falling out with partner Blake Aldridge.

“Top bombing,” grinned Daley after the medal presentation, after he and Goodfellow executed a tricky back three-and-a-half somersault pike in the last round to finish with a score of 89.64 and leave him as the first Brit to win medals in more than one Olympics.

The Chinese favourites Chen Aisen and Lin Yue unsurprisingly won gold, with the US pairing of David Boudia and Steele Johnson finishing in the silver medal position, with China looking for a clean sweep in the eight diving competitions following their fourth consecutive gold in this event.

Bizarrely, much of the British media opted to crop Goodfellow out of their coverage, as the Daily Telegraph, Daily Mail and Daily Express all led with a picture of Daley, while The Times identified him as Daley’s ‘synchronised partner’ in a subheading, as social media erupted in outrage.

Daley will now prepare for the individual event next week, in which the current world number two will be hoping to improve on the bronze medal he bagged in 2012.

Earlier in the day, Ed Ling won Team GB’s third medal of the games as he placed third in the men’s trap shooting after winning a tense shoot-off against Egypt’s Ahmed Kamar in the semi-final.

Competing in his third games, Ling finally secured his first Olympic medal after missing just two of his 15 shots in the bronze medal match.

Britain’s men’s gymnastics team narrowly missed out on bronze as they finished fourth, Louis Smith falling off the pommel during a complex routine to leave China in third place as Japan took the gold.

There was further disappointment for the women’s rugby sevens team as they lost their bronze medal match to Canada 33-10, while 20-year-old James Guy missed out on bronze by an agonising 0.26 seconds in the men’s 200m freestyle swimming final.