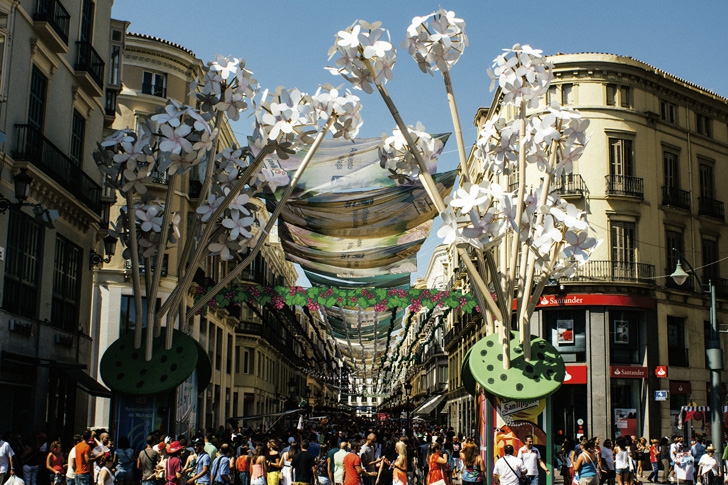 SOMETHING FOR EVERYONE: The feria is a serious summer shindig.

MALAGA’S Feria is undoubtedly the event of the year for city residents, a week-long blowout featuring family fun, fireworks, live music and multitudes of hangovers, but what does 2016 have in store?

Events begin at the Cortijo de Torres fairground on Friday, August 12, with the opening speech to be delivered by Vanesa Martin at 11.50pm, before a monstrous fireworks display is unleashed on the goggle-eyed crowd.

The jaw-dropping pyrotechnics will be followed by a set from singer-songwriter Barei, who represented Spain in this year’s Eurovision Song Contest, as the party begins in earnest on the so-called ‘Night of Fire.’

For those preferring to avoid the bustle of the main festival site, the fireworks show can be viewed from the ramparts of the city’s cathedral for the first time, with tickets available from the website mientrada.net for €18 a pop.

As always, daytime and night-time events are split between the city centre and fairground, with a diverse series of parades, concerts, shows, workshops, and other activities taking place around the old town from 1pm every day, while the ‘casetas,’ those temporary huts which house restaurants and bars in the fairground, will be open from 2pm in a new initiative for 2016.

In celebration of its 50th anniversary, official festival sponsor San Miguel is donating an extra €270,000 this year in order to boost the image of the jamboree at the national level, with a number of high profile artists performing at Cortijo de Torres every night from 11pm, while a multitude of live performances will enliven the city streets.

Love it or hate it, bullfighting is an integral component of the feria, and 2016 is no exception, with daily fights at 7pm starting on Sunday, August 14, and an impressive line-up featuring Sevillano matador Morante de la Puebla in addition to Miguel Angel Perera, Enrique Ponce, Alberto Lopez Simon and Madrid-born legend Jose Tomas.

While the majority of events come to a close on the evening of Saturday August 20, or more accurately, Sunday morning, there is a final parade scheduled for 8pm on August 21, which will attempt to recreate the entrance of the Catholic Kings to the city.

Further information regarding the programme, with a passable translation into English, can be found on the website http://feria.malaga.eu.

Security at the feria

WHILE the feria is generally a peaceful event, there are pickpockets about, so it is wise to keep handbags and purses closed, and do not leave them unattended or on the edge of tables where they can be easily snatched. This year sees the launch of the ‘No is No’ campaign against sexual violence, as covered extensively by EWN, and it is to be hoped that this admirable initiative is effective in consigning cowardly harassment to the past.

THERE will be 8,492 spots available at the main fairground, with an additional 1,100 places at the conference centre, 2,555 at Los Prados, 1,500 in Huerto del Correo, and 1,477 in Teatinos, in addition to the public car parks in the city centre which will remain open for 24 hours throughout the feria.

Alternatively, the Line F bus service will link the centre and fairground 24 hours per day, with additional shuttle services scheduled to begin at 9pm each day, many of which run to specific districts, with full details available at www.emtmalaga.es.