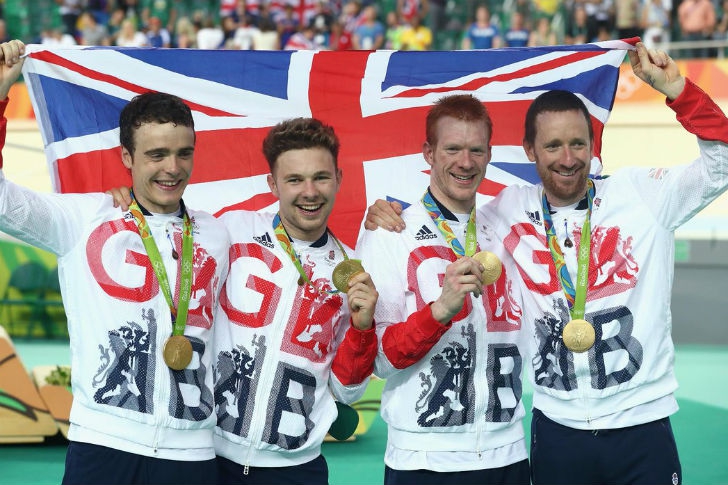 SIR Bradley Wiggins became the first British athlete to win eight Olympic medals as the men’s team pursuit saw off a strong challenge from Australia to win gold and further consolidate his place in the pantheon of sporting greats.

The 36-year-old, cycling alongside the brilliant trio of Ed Clancy, Owain Doull and Steven Burke has now amassed five golds, one silver and two bronzes, as the team completed the 4 kilometre final in three minutes 50.265 seconds to beat the boys from down under by almost a second, setting a new world record in the process.

The British team were forced to come from behind as the Australian world champions blasted away in the early laps, opening a gap of over half a second by the 2000 metre mark, but Team GB began to haul them in with eight laps to go, drawing to within one hundredth of a second by 3000 metres, and from there the result never appeared in doubt.

“It was just about keeping your bottle, it wasn’t easy,” said Clancy. “We could sense by the crowd we weren’t ahead. When we crossed that line a second ahead, I think it was the happiest moment in my life.”

Wiggins was frank about his Olympic future, as he added: “It’s over in a flash and we’ll all be hungover tomorrow.

“That wasn’t my last race, but it was my last Olympic Games. My kids have never known anything other than me being an Olympic athlete and they need me now.”

Britain added two more golds in the rowing, where the formidable duo of Heather Stanning and Helen Glover dominated the coxless pairs to extend their superb winning run to 39 races, while Alex Gregory, George Nash, Constantine Louloudis and Mohamed Sbihi picked up gold in the men’s coxless four.

Elsewhere, defending champions Britain bagged silver in the team dressage event, as the quartet of Spencer Wilton, Fiona Bigwood, Carl Hester and Charlotte Dujardin were beaten by Germany, with Dujardin now set to defend her individual title after qualifying second for Monday’s final.

In trampolining, Brony Page won an unexpected silver medal, becoming the first British woman to finish on the podium in an event introduced at the 2000 Olympics, while Jazz Carlin also won silver in the women’s 800 metre freestyle swimming final to add to the silver she nabbed in the 400 metres earlier in the week.

Team GB now lie an impressive third in the medal table, having racked up seven golds, 9 silvers and six bronzes for an overall total of 22 medals, with further victories expected on day eight, as the men’s and women’s eights go in the rowing and Nick Dempsey appears set for silver in windsurfing, while Jessica Ennis-Hill, Greg Rutherford and Mo Farah aim to defend their women’s heptathlon, men’s long jump, and men’s 10,000 metre titles in track and field.